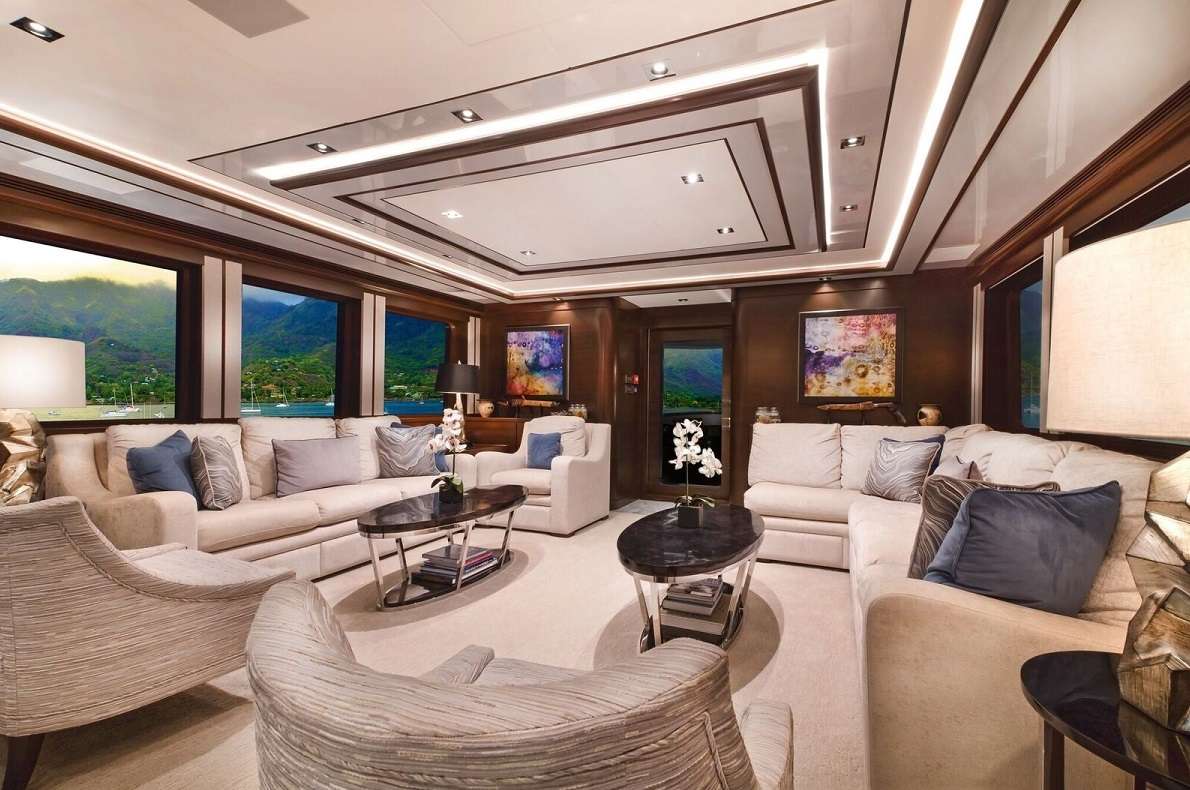 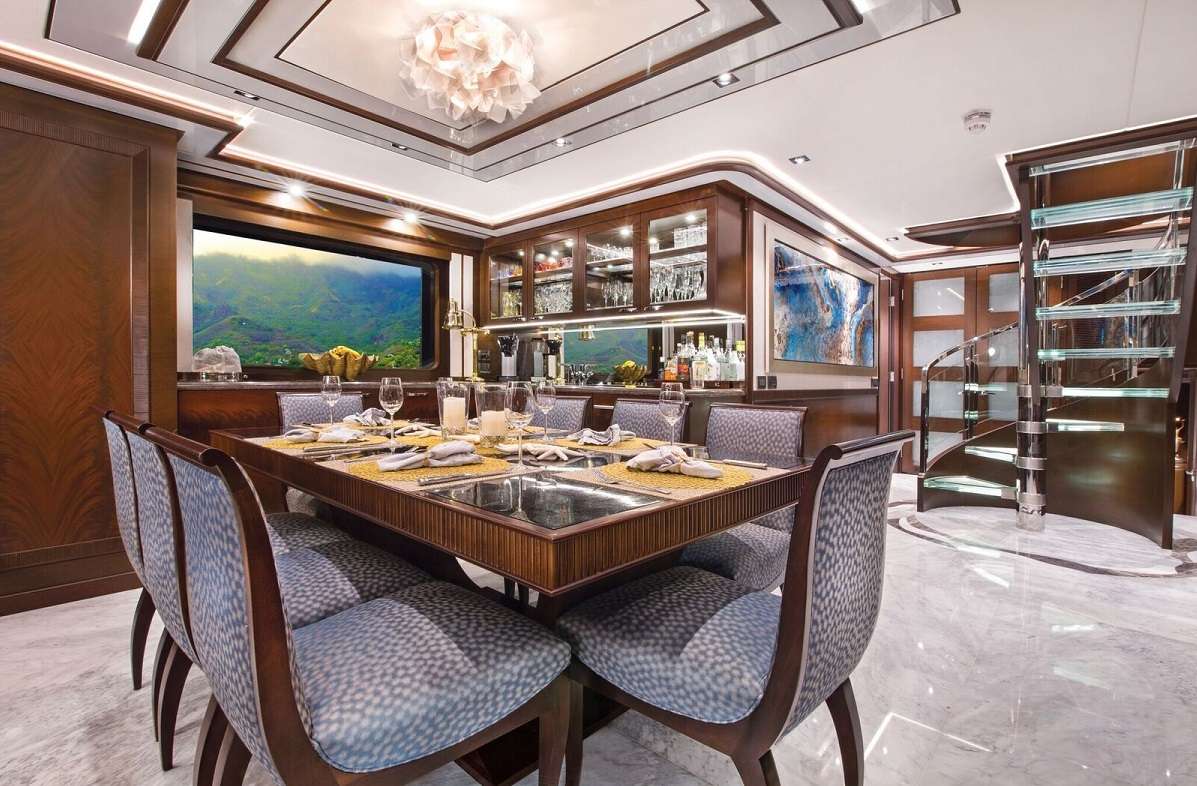 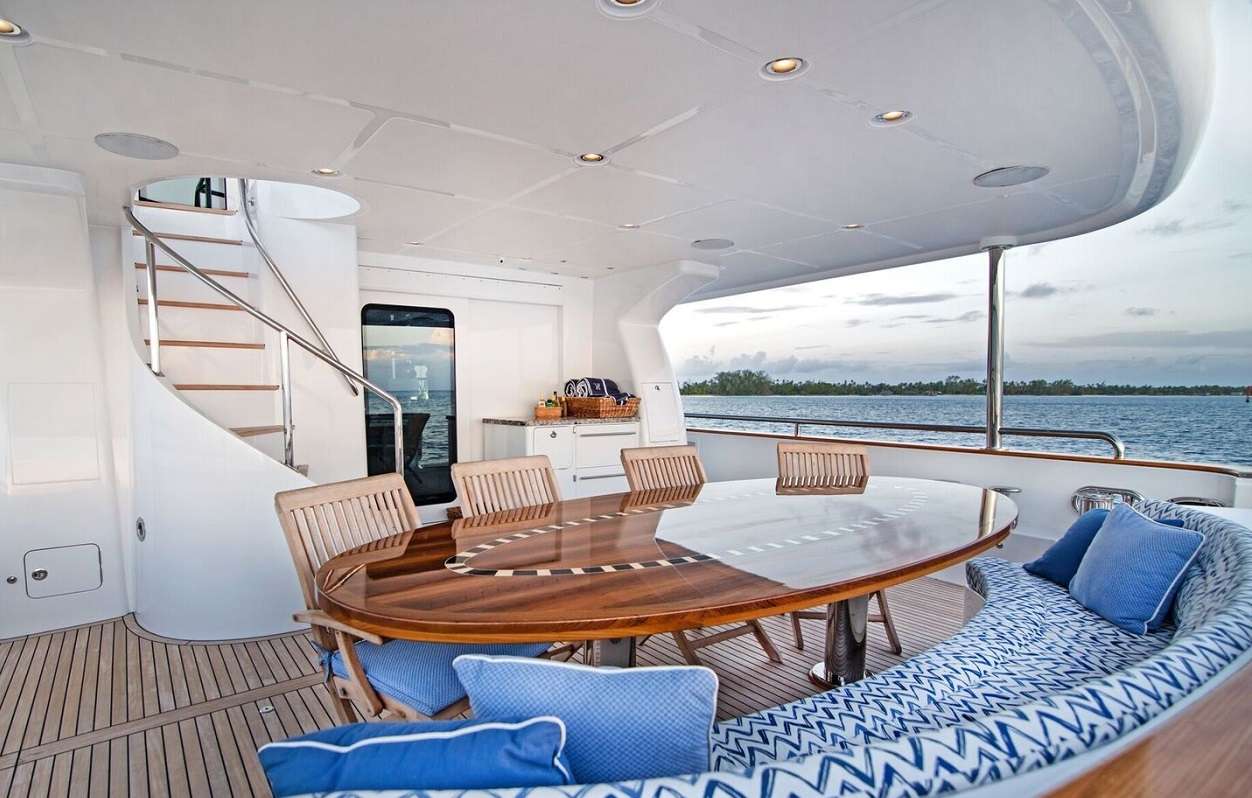 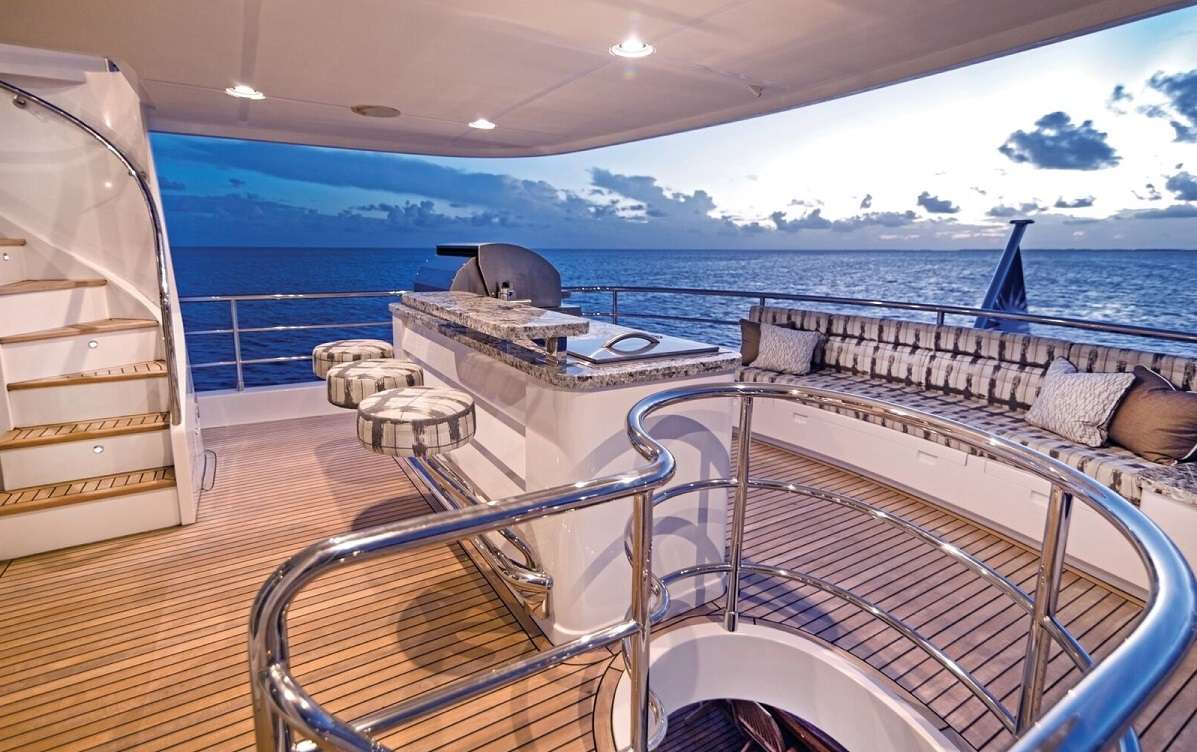 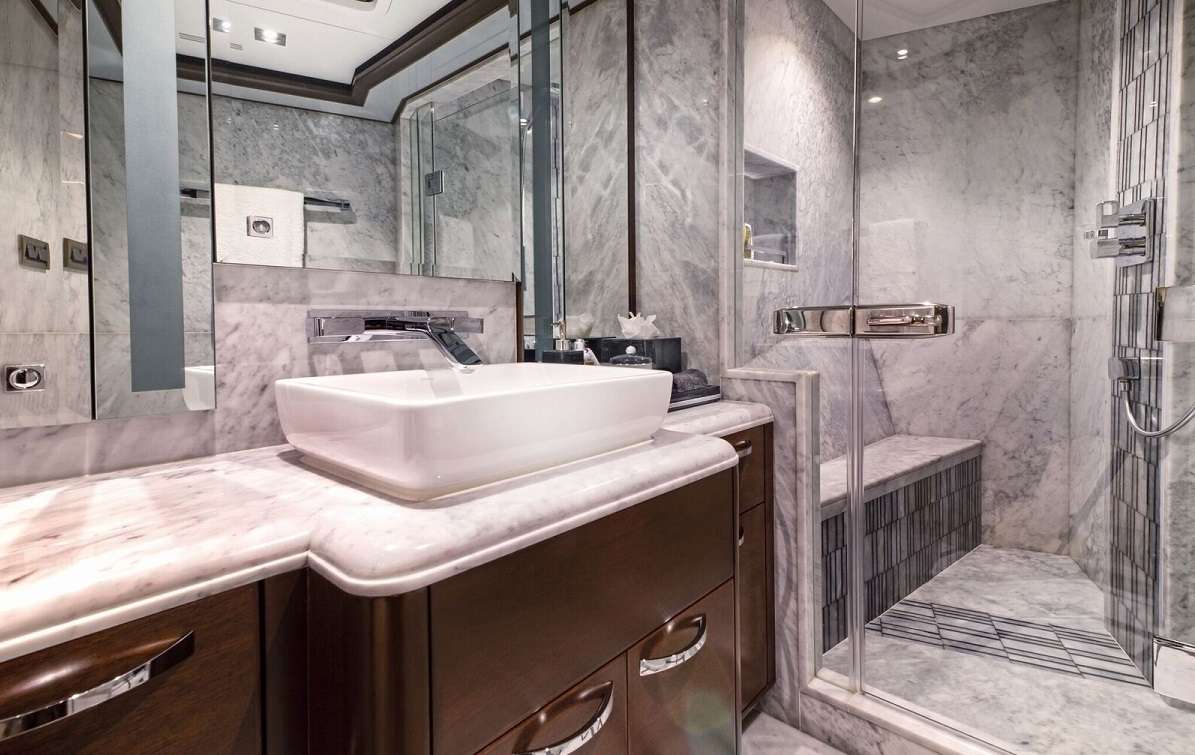 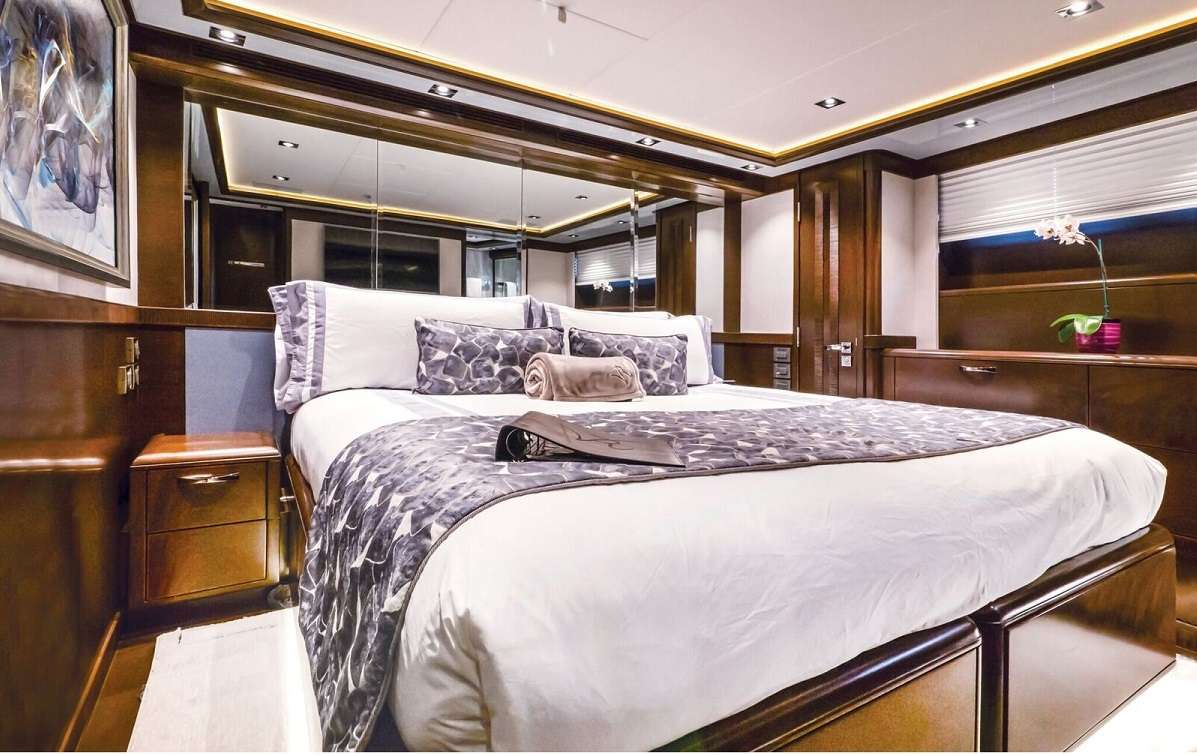 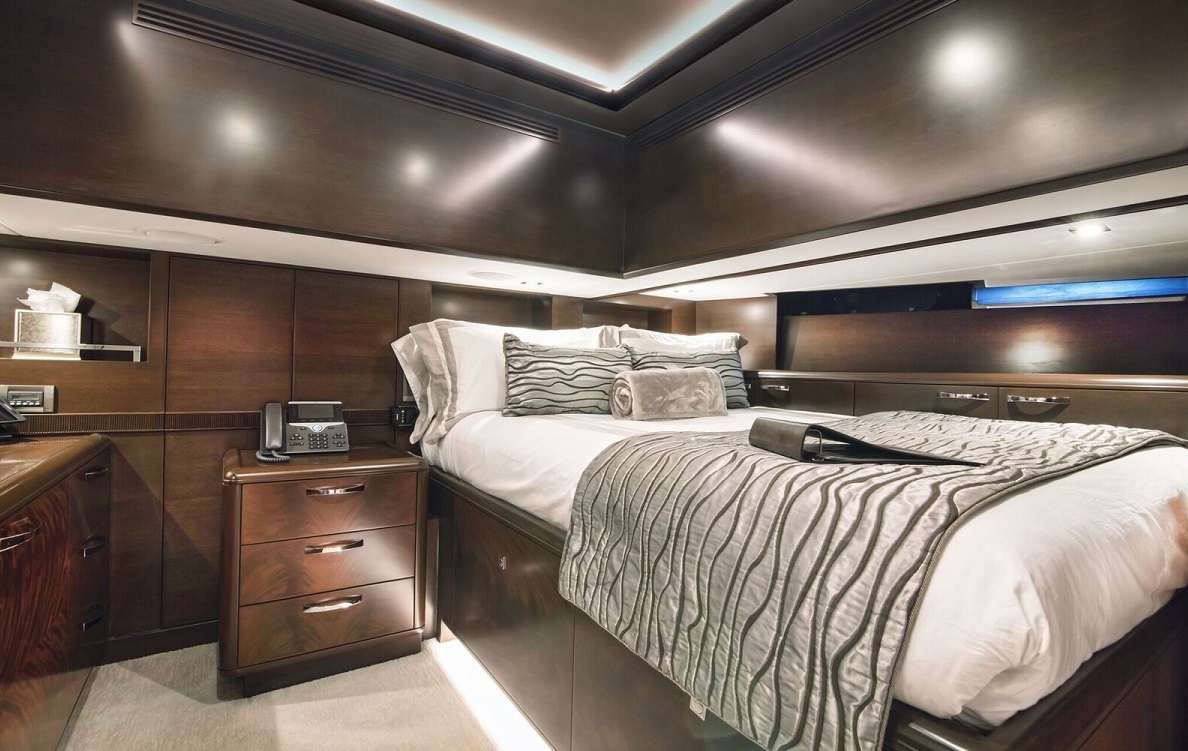 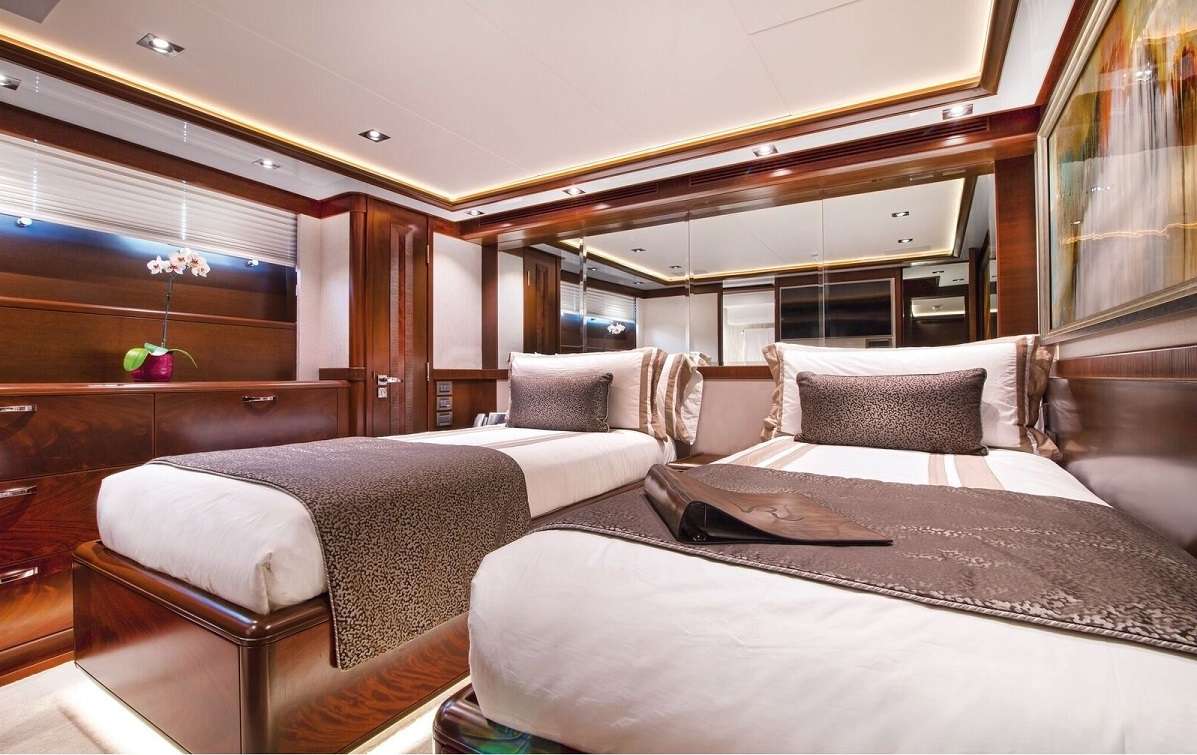 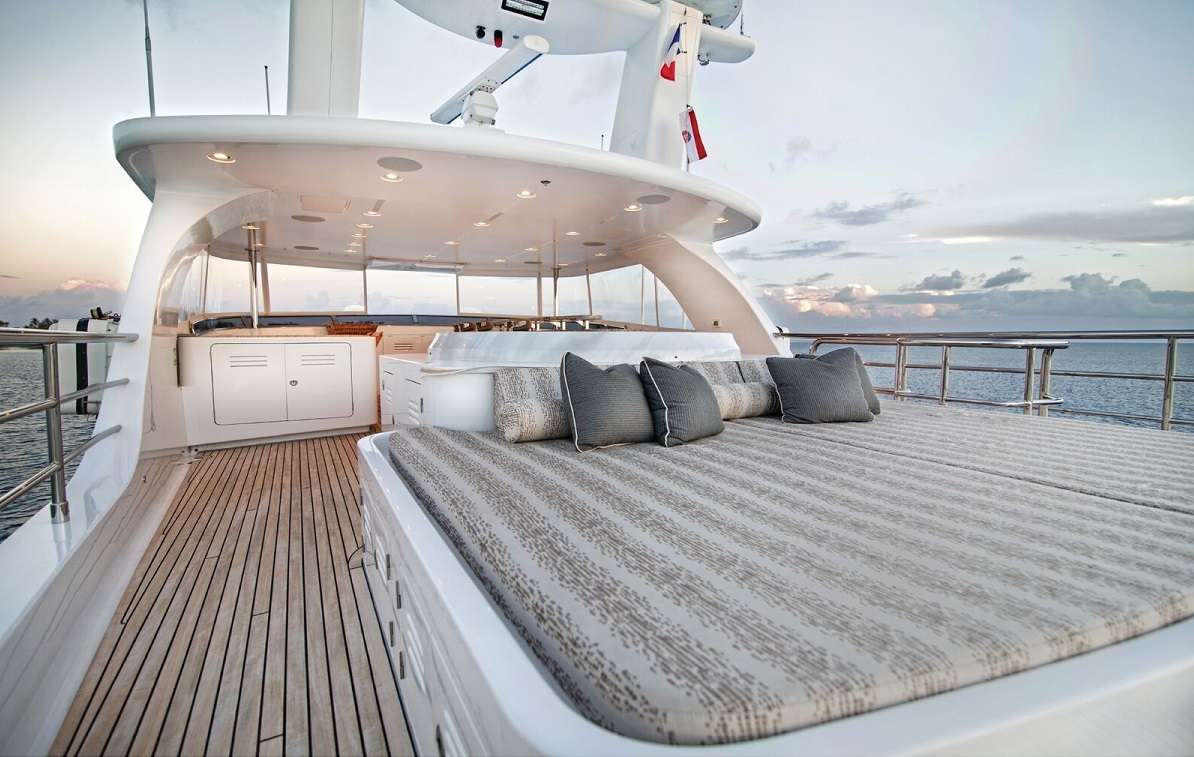 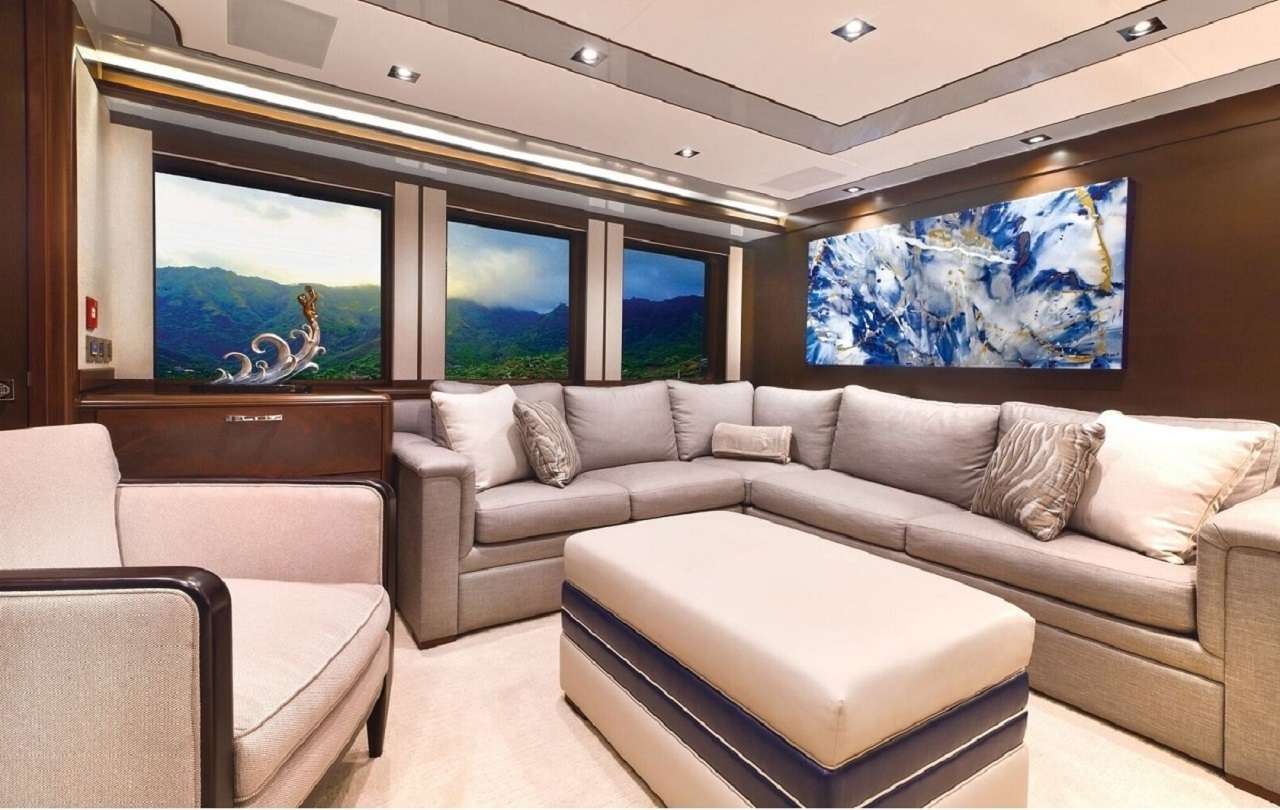 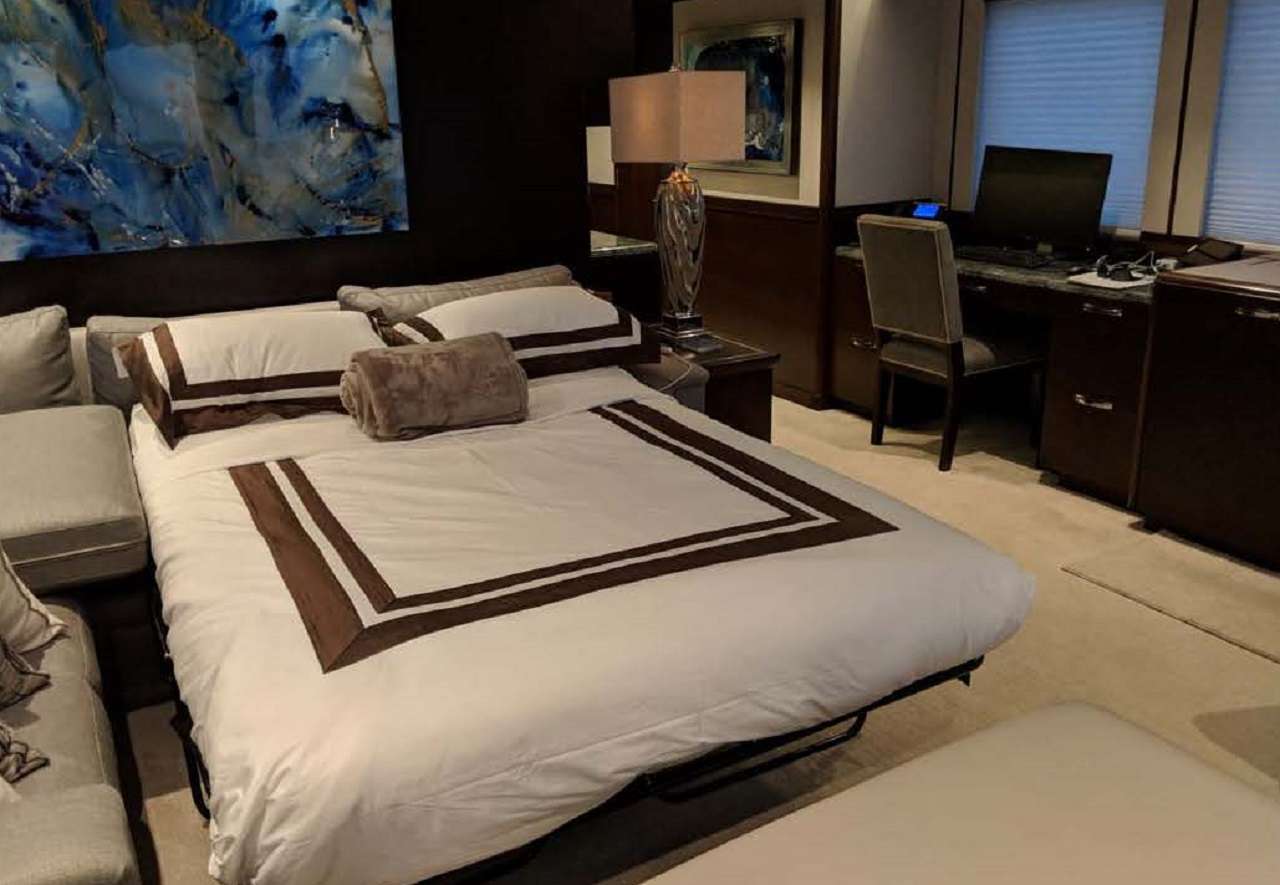 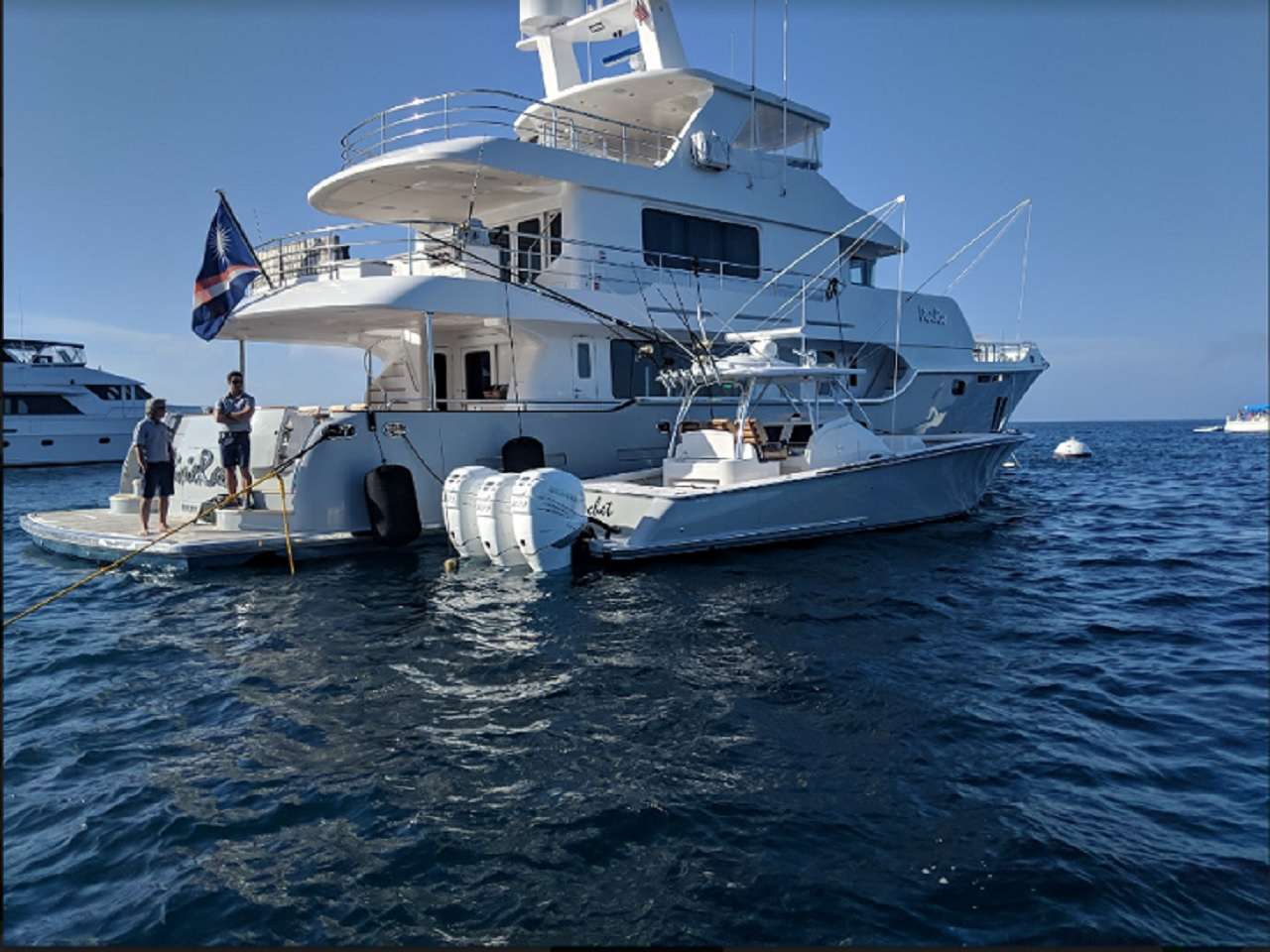 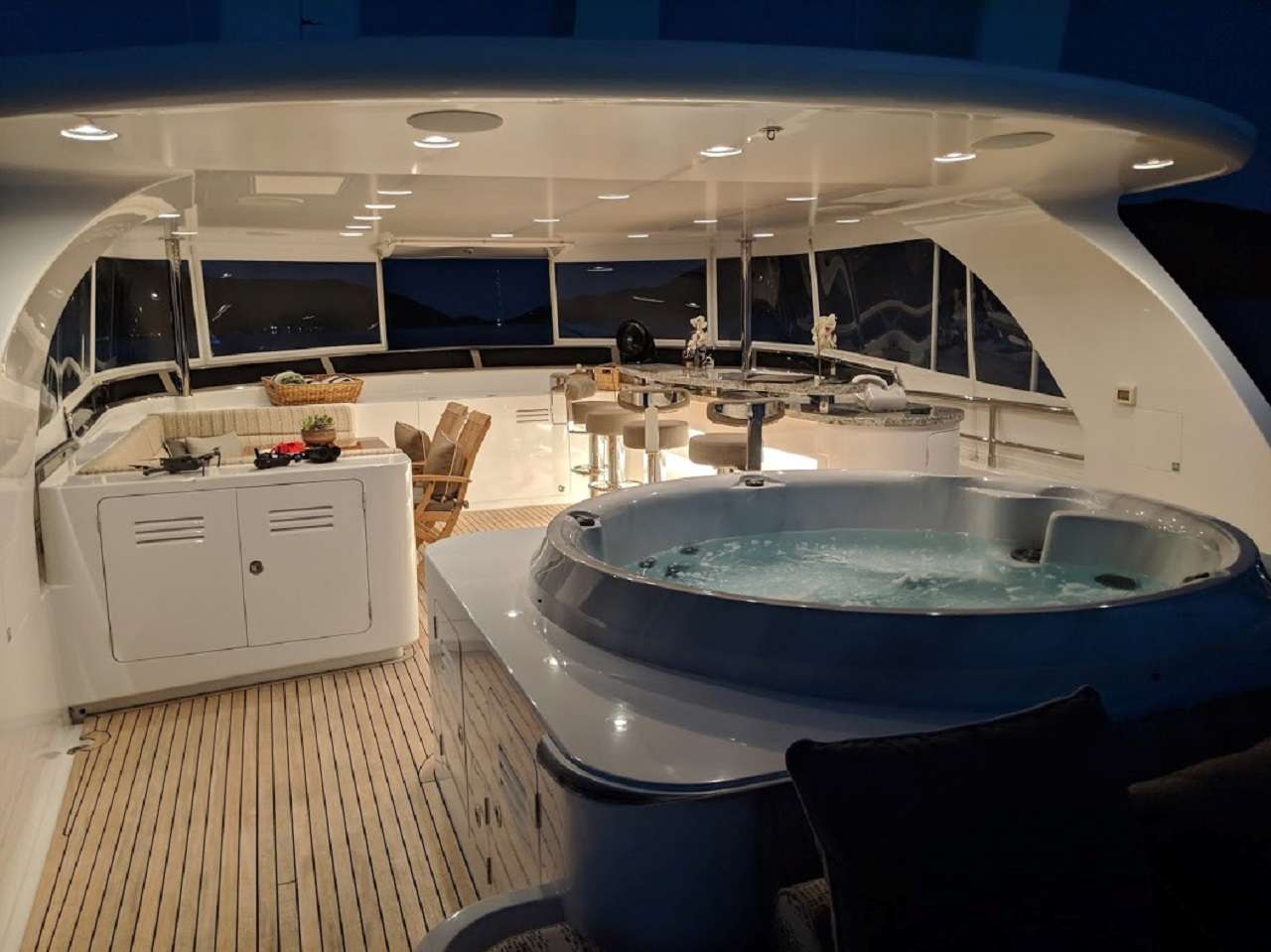 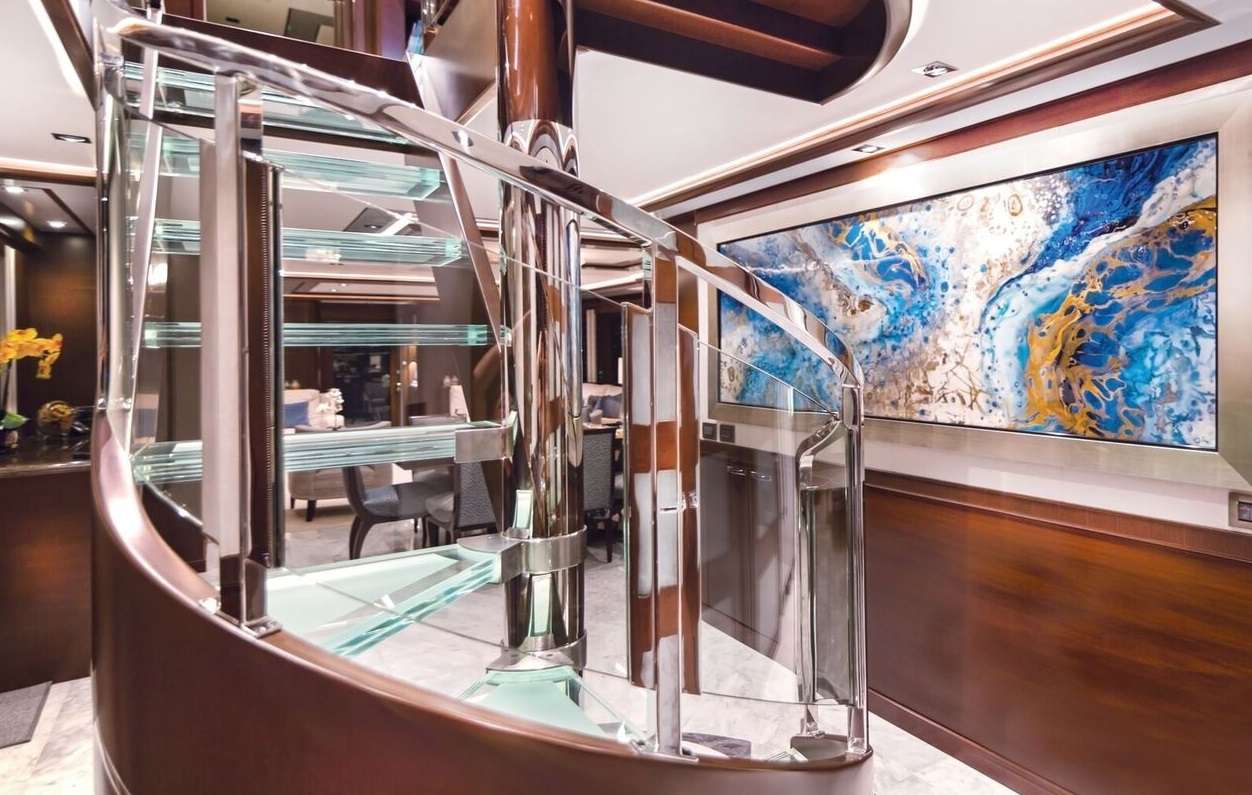 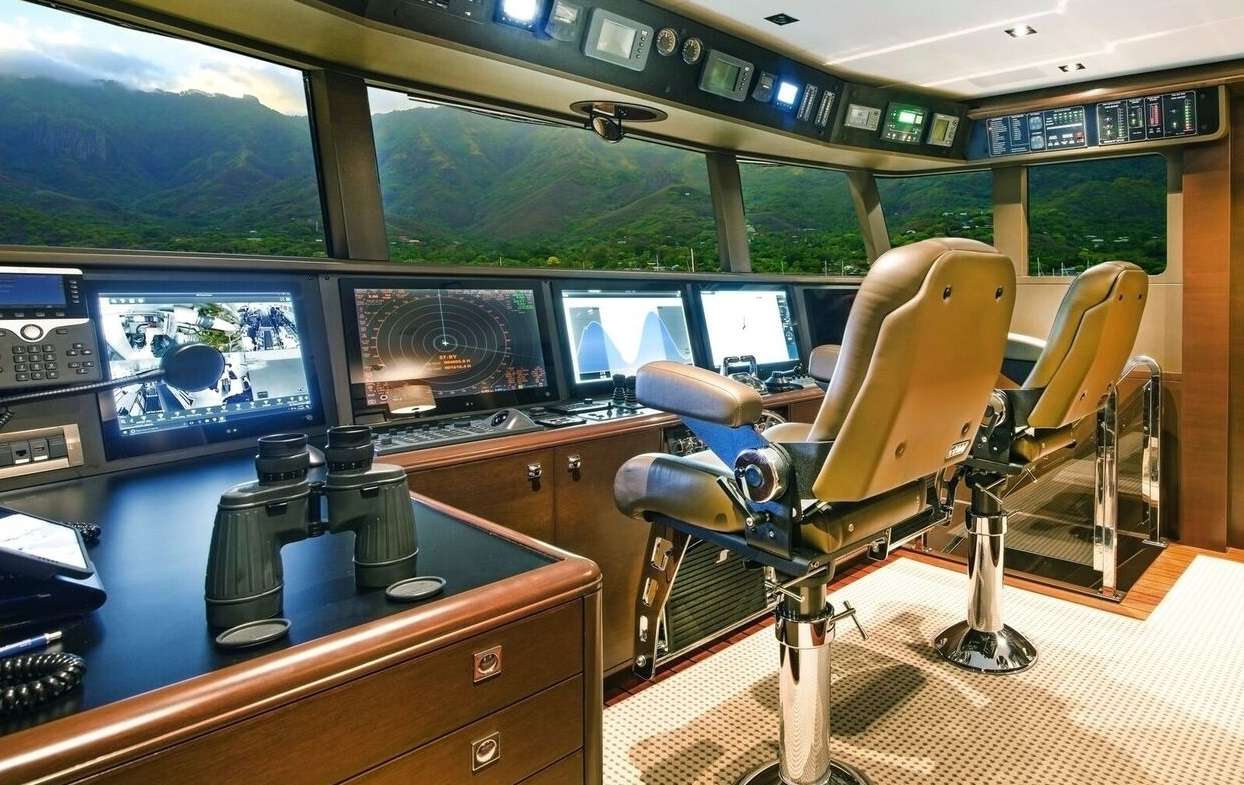 10 guests, · 4 Showers, · 0 Wash Basins
VivieRae II nominated for The World Superyacht Awards 2018 'Voyager’s Award' VivieRae II has mega-yacht styling, luxury and the capability to travel the world, all within a manageable 30 meters. She boast a luxurious interior, and functional yet relaxing exterior spaces, that mimics those of mega-yachts for the highest level of comfort imaginable, no matter how remote the itinerary. VivieRae II has a big skylounge aft of the pilothouse outfitted with pull-out sofa, desk, and 65” television enabling multi-purpose uses for lounging, working or a bonus sleeping quarters. Electric sliding doors open up to the skylounge deck featuring a bar, bar stools, drinks fridge, BBQ, and of course, a spectacular view – everything you need for entertaining. For the active guest, she has a custom 39' tender rigged for diving and fishing. She also has 7 complete sets of dive gear along with a hyperbolic chamber. (Diving by prior- arrangement only) VivieRae II has been fitted with a large hardtop Bimini, offering shade to guests relaxing on the superyacht sundeck. Other key features include a shaded aft cockpit and a smart grey hull finish. VivieRae II brings a source of pure enjoyment, a place to get away from the rigors of everyday life, a haven in which to spend time with the people you love most. Note: Not for sale or charter in US waters

Gareth Schwegman Captain(rotational)
Captain Gareth Schwegman was born in South Africa and grew up around the yachting industry. His love of the ocean and seamanship skills was honed in his native South Africa on family sailing excursions off the coast of Durban and Mozambique. His father’s sailing school, which specializes in mega yacht crew training, also played a role in Gareth’s decision to join the yachting industry and obtain his captain’s license. Gareth began his yachting career as a deckhand in 2001 and in 2005 became a captain on the Belle de Jour. Prior to VivieRae II Gareth was the captain on VivieRae another Nordhavn owned by Bob and Sandy Giles. Gareth has been the captain for Bob and Sandy Giles since October of 2012. He was instrumental in the build process of VivieRae II and is responsible for many design ideas that were incorporated during the build process to make sure that VivieRae II was completed to the highest standards.
Gareth is married to Carolyn and they have two boys Josh and Ethan. Carolyn was the chef on the former VivieRae until they had their second child. “Caro” as she is referred to and the boys are welcome visitors to the boat and Mike and Teri have almost become there aunt and uncle.
Gareth holds his MCA Yachtmaster Offshore 200 ton license, MCA Yachtmaster Ocean, MCA Navigation and Radar, MCA General Ships Knowledge, MCA Advanced Sea Survival, and Marshall Islands Endorsements for Offshore and GMDSS certificates.
Gareth has extensive cruising experience in the Caribbean, Central America, and the West Coast of California to Alaska and the entire east coast to New England. Gareth is happy to answer any questions you may have and looks forward to leading guests of M/Y VivieRae II to new discoveries.

Arnold Heins Captain – (Rotational)
Arnold comes to Vivierae II with ten years of experience under his belt. His career took off back in 2008 when he started as deckhand on a 76’ sailing catamaran. It was a life as a dive instructor and a love for the ocean that lead him to pursue a career in yachting. In 2011 he became Captain on a 58’ charter sailing catamaran. Arnold transitioned from sailing yachts to motor yachts in 2013 when he started to run a 100’ Hargrave in South Florida and the Bahamas.
Before captaining Vivierae II, Arnold was the captain on board the sister ship, a 96’ Nordhavn, Lacey Kay. Arnold ran Lacey Kay alongside his wife and two other crewmembers for almost three years. He cruised with the owners from Alaska to Panama on the west coast, and from Columbia to Maine on the east coast.
He has extensive cruising experience of the Caribbean, Bahamas, New England, Central America and the west coast of America, including Alaska.
Arnold's love for diving, water sports, and spotting the ideal anchorage makes him a great asset to Vivierae II. His passion for people, entertaining and being on the water is evident to his guest and makes for the perfect charter experience. He is from South Africa and speaks English and Afrikaans.


Briar Meades Chef
Briar is from New Zealand, she grew up with her father, a Chef, so naturally a passion for food was quickly instilled into her at a young age. Under his guidance she developed many skills and then Briar furthered her knowledge and skills from her eldest sister who also became a Chef.
After high school Briar moved to Western Australia and spent the next two years living and traveling around Australia. She then settled back home in New Zealand and began her culinary training at The New Zealand School of Food and Wine. Briar worked as a Corporate Catering Chef at a law firm for 2 years before moving to a new venture at Misters Cafe. There she developed a holistic approach to cooking as it was a gluten free, refined sugar and dairy free establishment. Most recently Briar was the sole Chef onboard M/Y Andrea VI for two years, cruising the East Coast of America and the Bahamas.
Briar has attained her level three certificate in Culinary Arts, level three Certificate in food safety and hygiene, STCW 95, and has her open water SCUBA certification.
Briar looks forward to catering to all your culinary needs.

Matt Cowie Mate
Matt grew up in both Australia and New Zealand, he is an avid surfer who leads a healthy lifestyle and loves life on the water. Growing up near the beach helped shape Matt into the ocean lover he is today, he loves to surf, fish and dive in the world’s most beautiful destinations.
This is Matts sixth year in the yachting industry and so far the job has taken him to some of the most beautiful places on the planet with extensive cruising of the Mediterranean, the Middle East, The Maldives and most recently the Bahamas and the east coast of the United States.
Matt has several certifications including RYA Yachtmaster, Offshore RYA, Powerboat level II, Approved Engine Course, Open water SCUBA diver, Diploma in Fitness (AUT University New Zealand) just to name a few.

Stewardess- J-Dean van der Westhuizen
J-Dean grew up in Potchefstroom- a small town in South Africa. After completing her honors degree at University she moved to Johannesburg to follow a career as New Business Executive. Her heart was yearning to travel the world, meet new people and learn about other cultures. J-Dean resigned from her big city job to pursue a career as stewardess with Emirates airlines where she worked for 3 years. Meeting her now fiancé in Dubai they decided to join the yachting industry together. J-Dean enjoys hiking, kayaking, SUP, fishing, scuba diving and team sports in her time off. She looks forward creating a memorable experience on board!

Deckhand- Jevan Wyngaard
Jean grew up in small fishing town in South Africa. After completing School he did a 6 month apprenticeship in building Boats. Once he complete his apprenticeship he got offered a contract to go play rugby in England. Having a injury change his vision into hospitality where he went to Dubai to work for Well-known Hotels Like Marriott International & IHG hotel groups in the food & beverage department.
Jean met his Fiancé (J-Dean) in Dubai and they decided to go travel the world by working in the yachting industry. Jean enjoys fishing, sports, Kayaking and scuba diving on his off time. 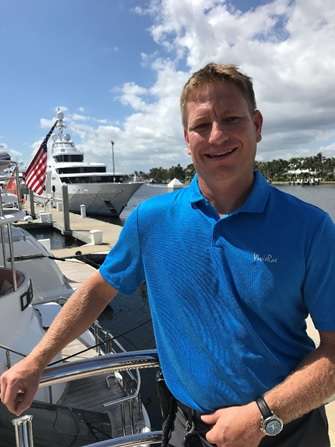 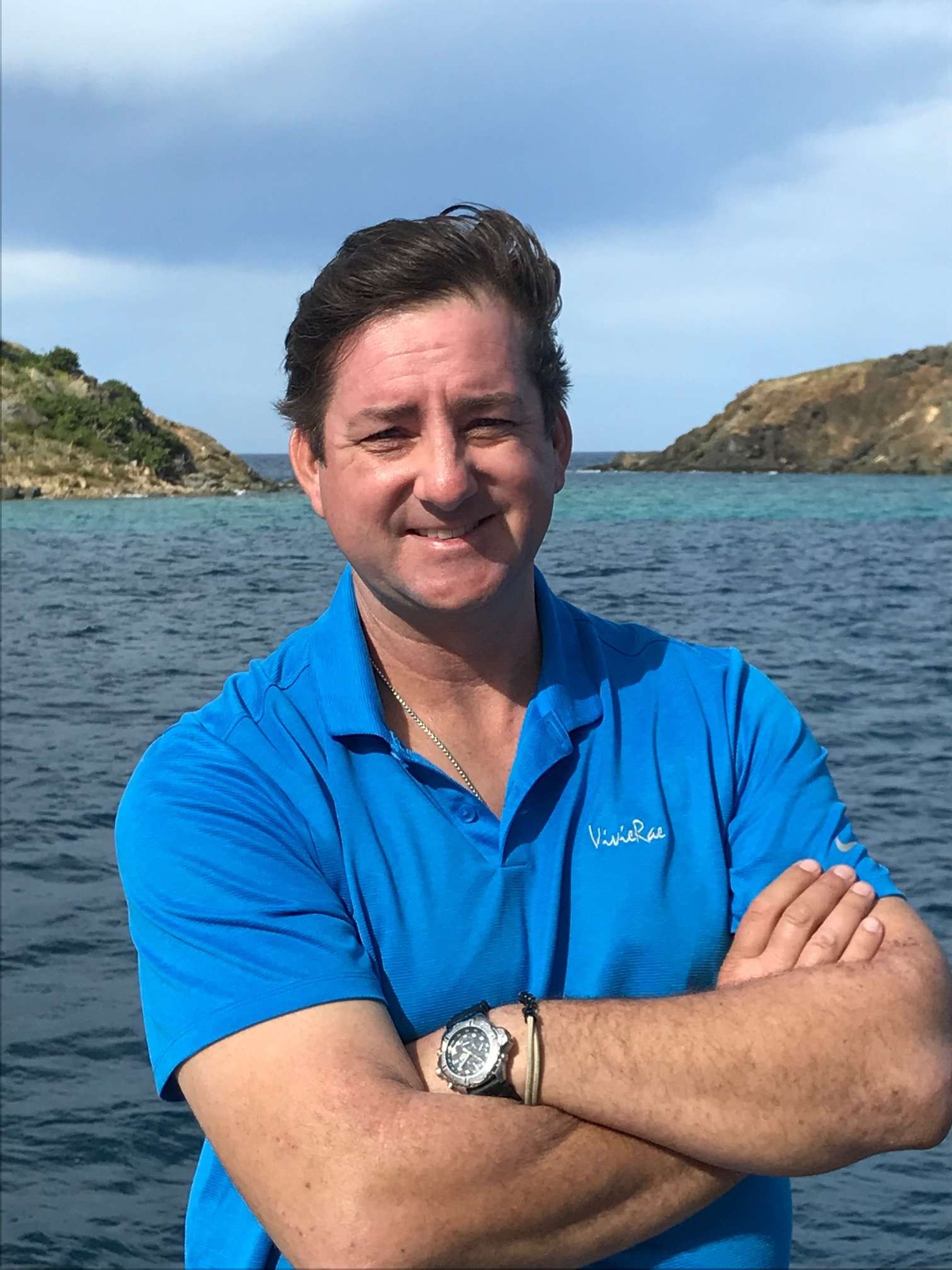 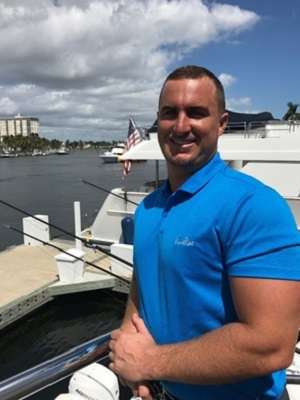