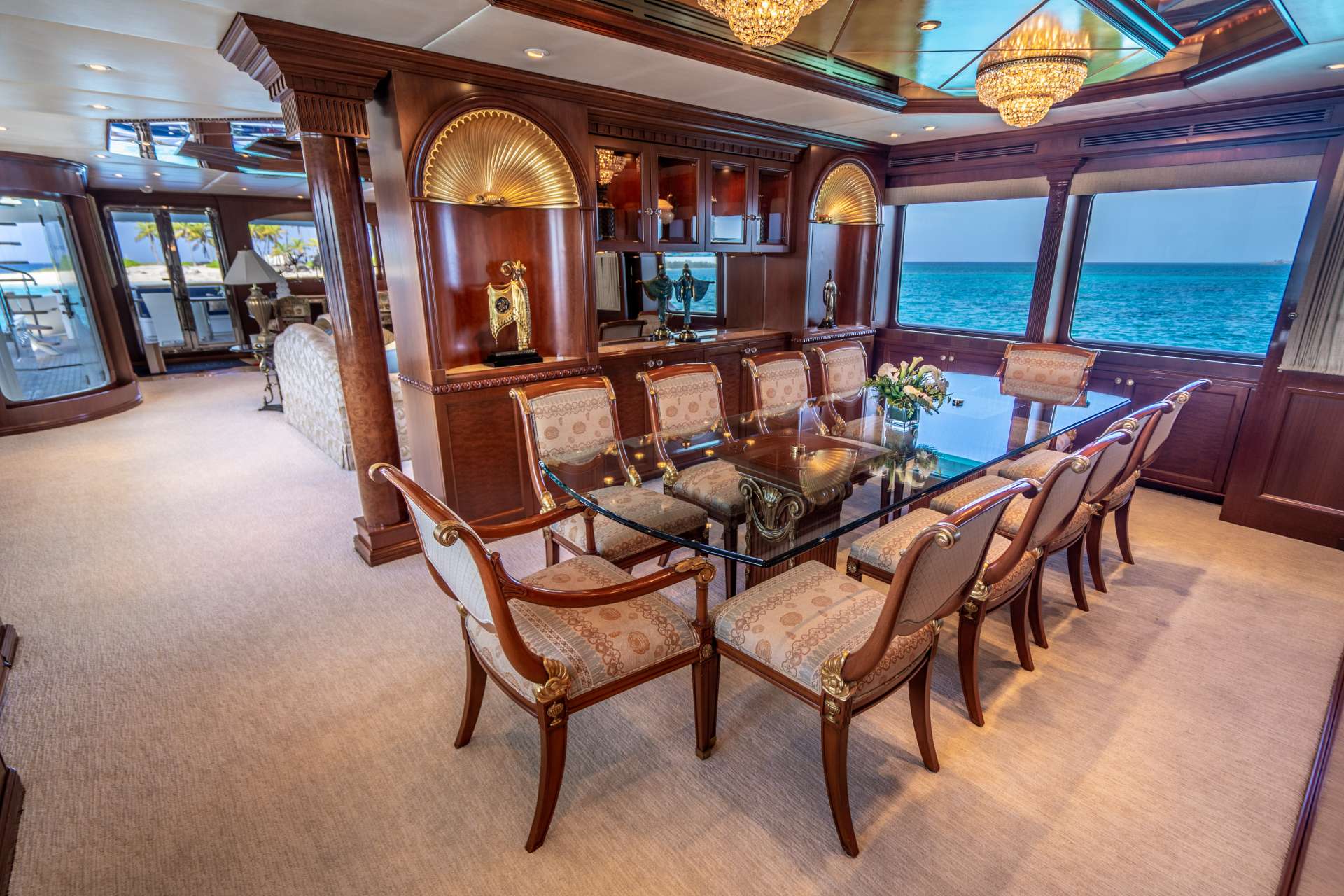 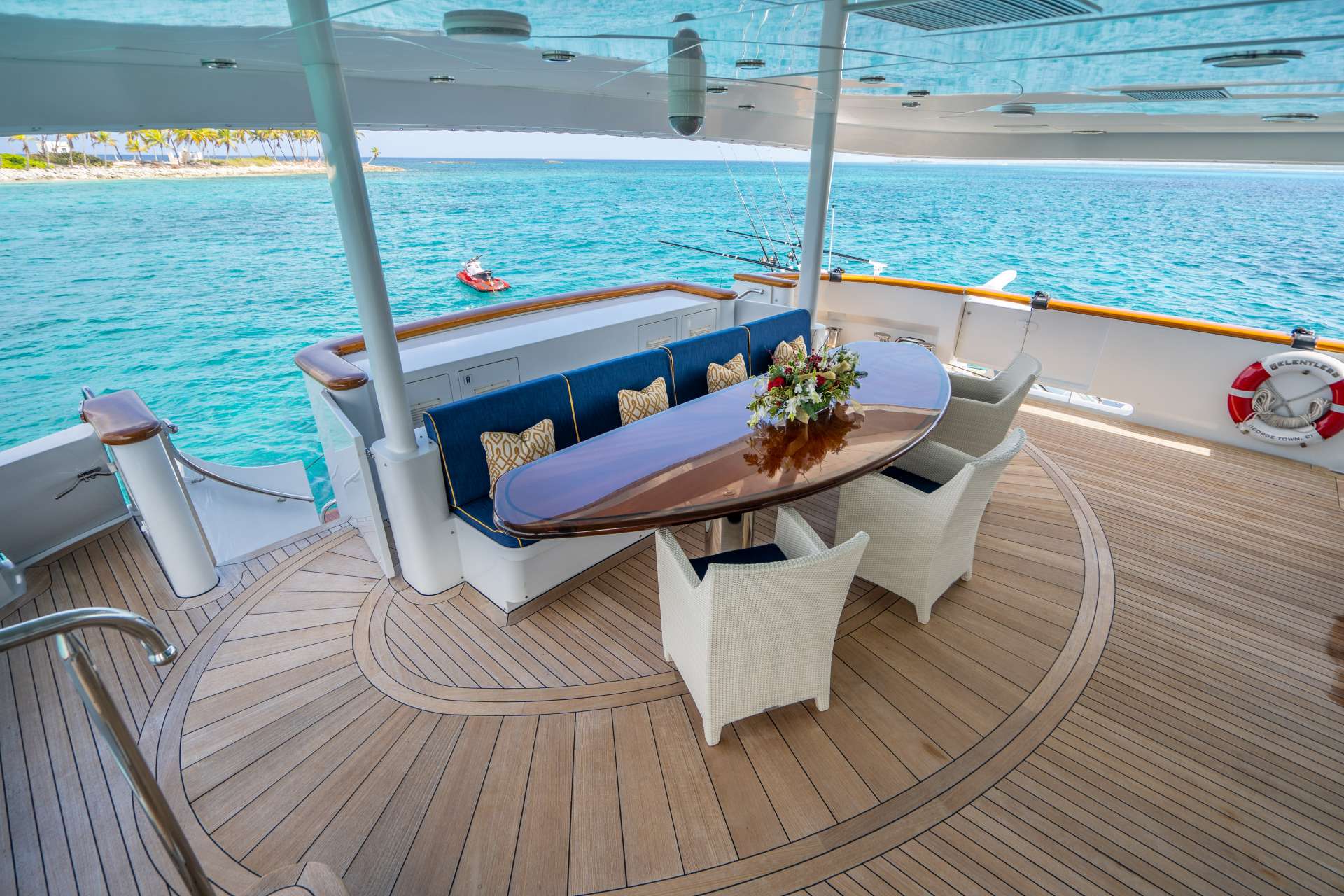 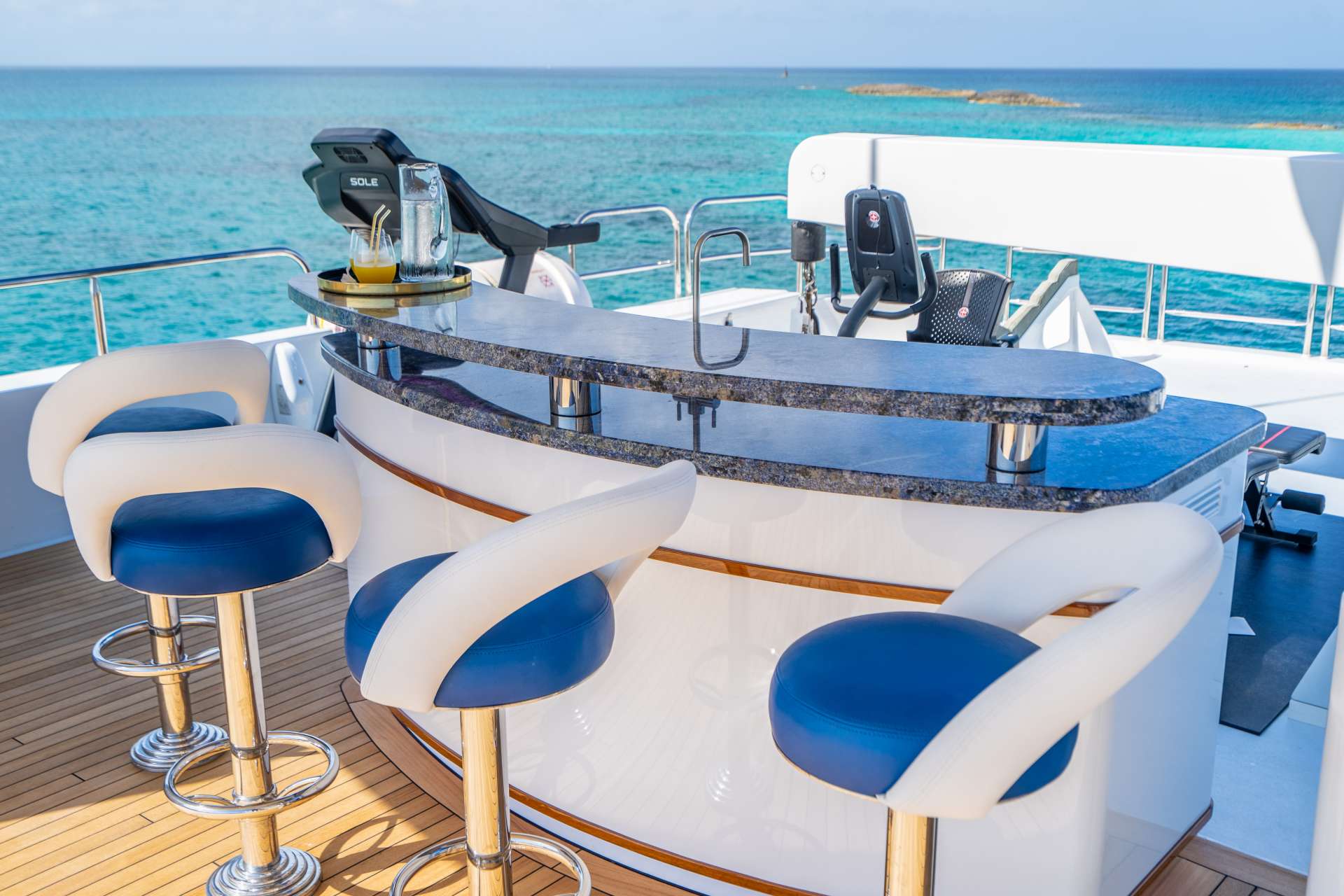 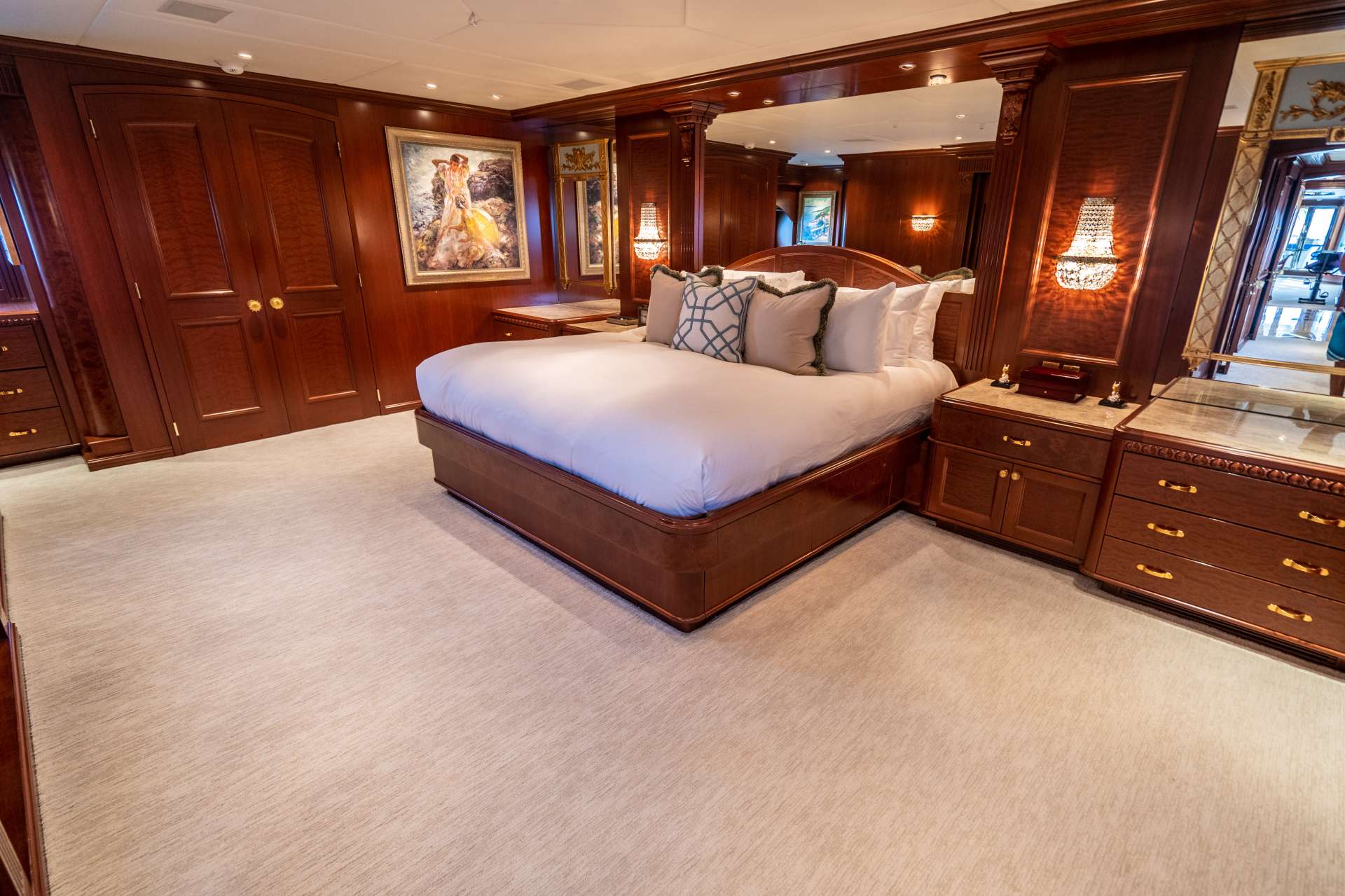 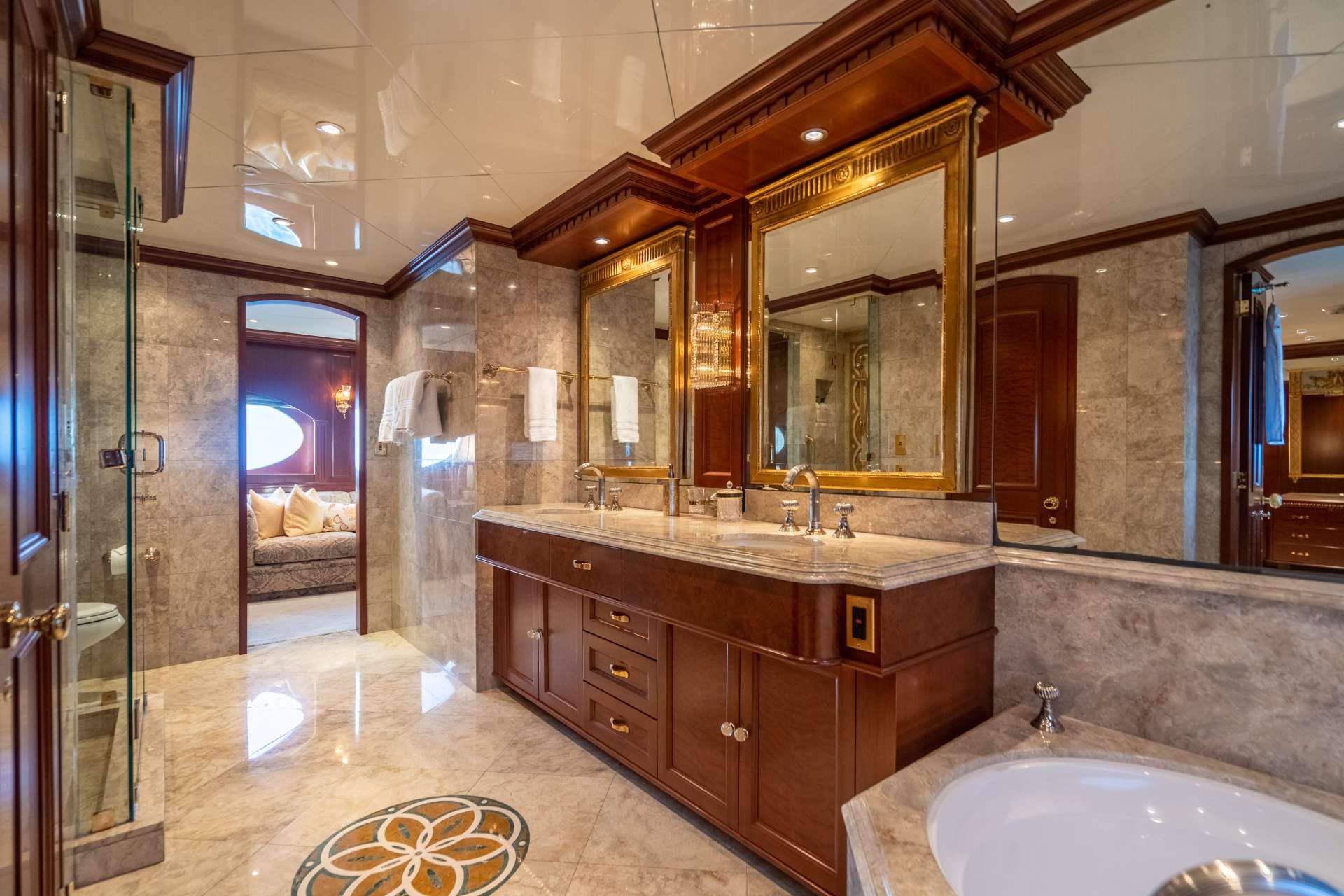 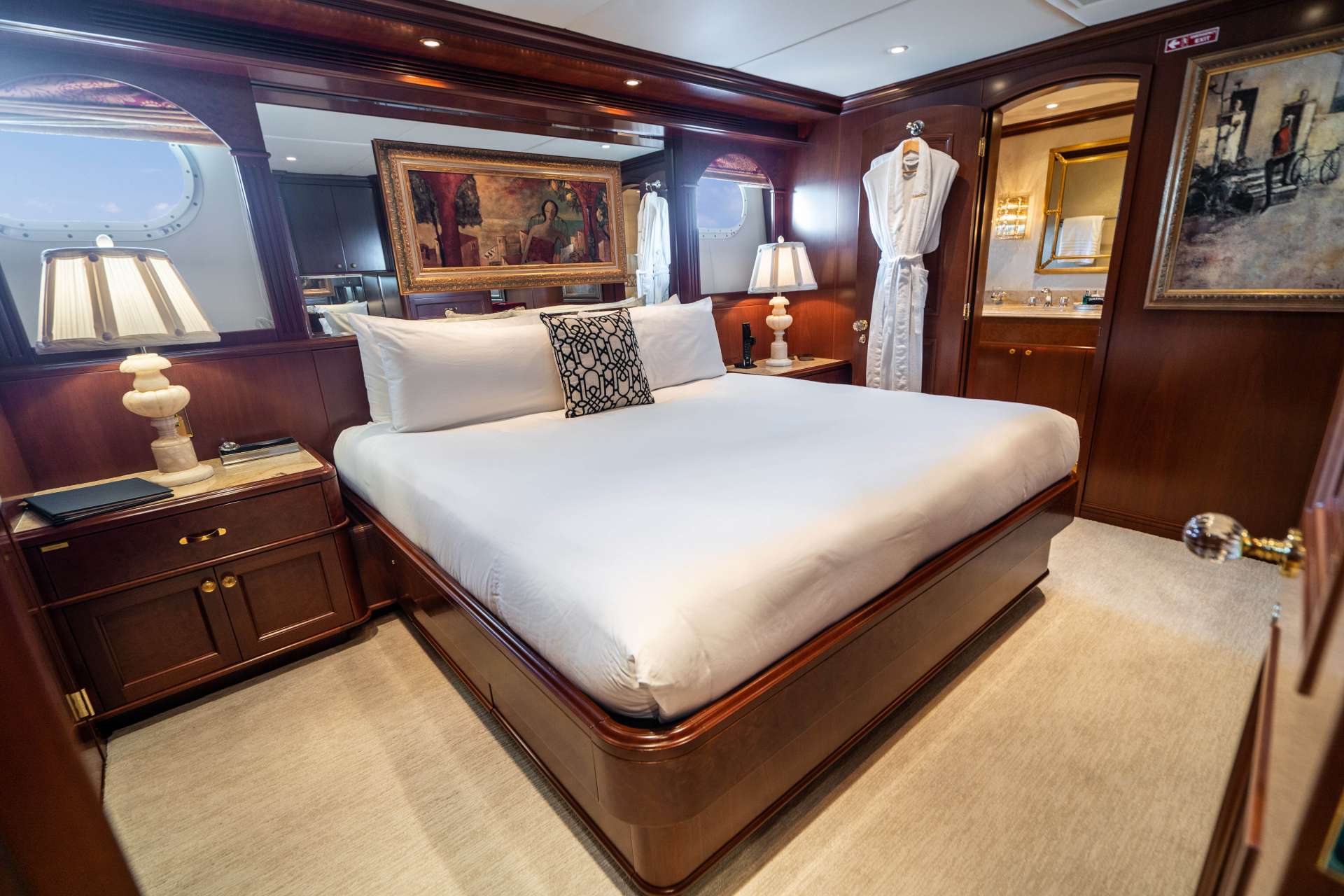 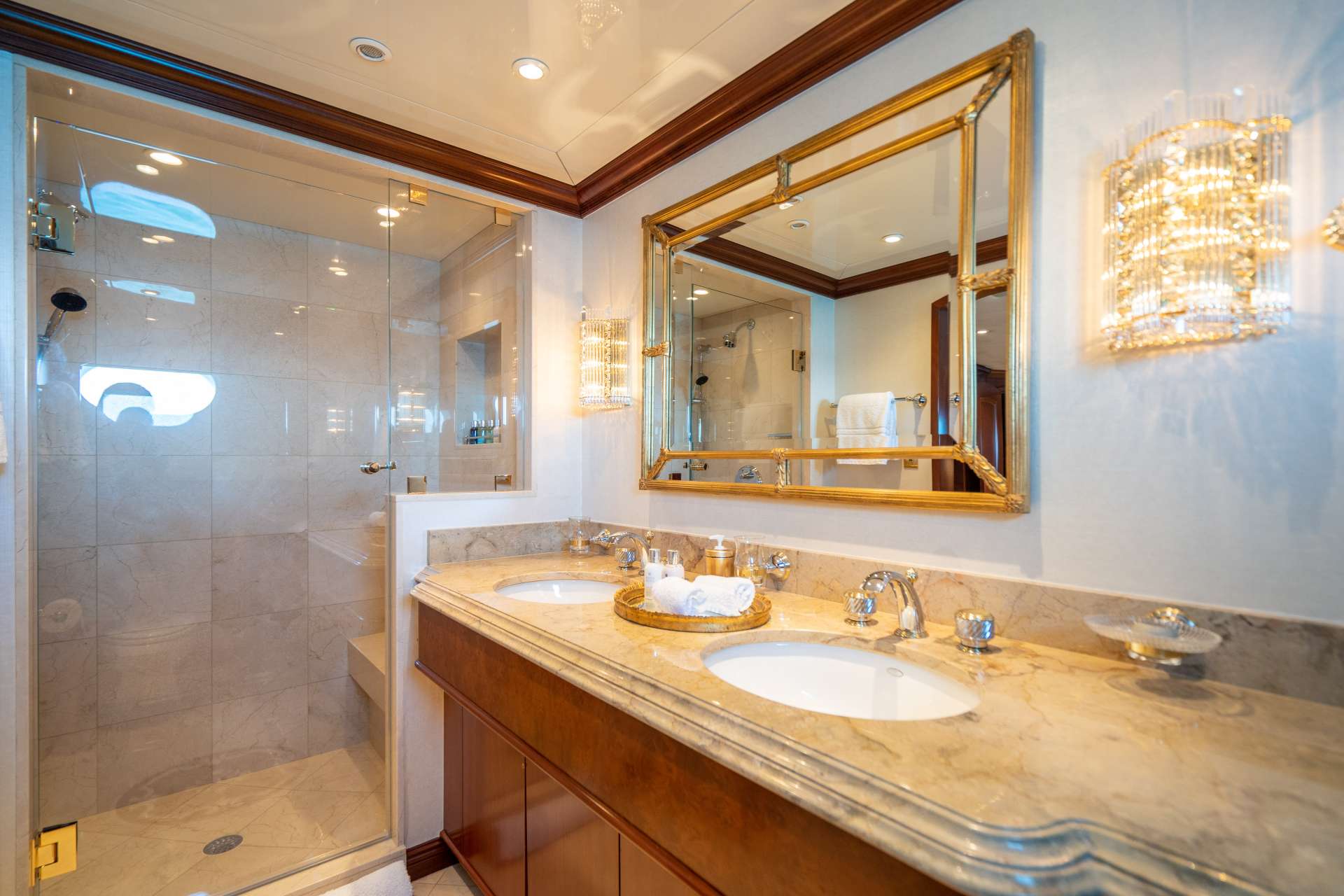 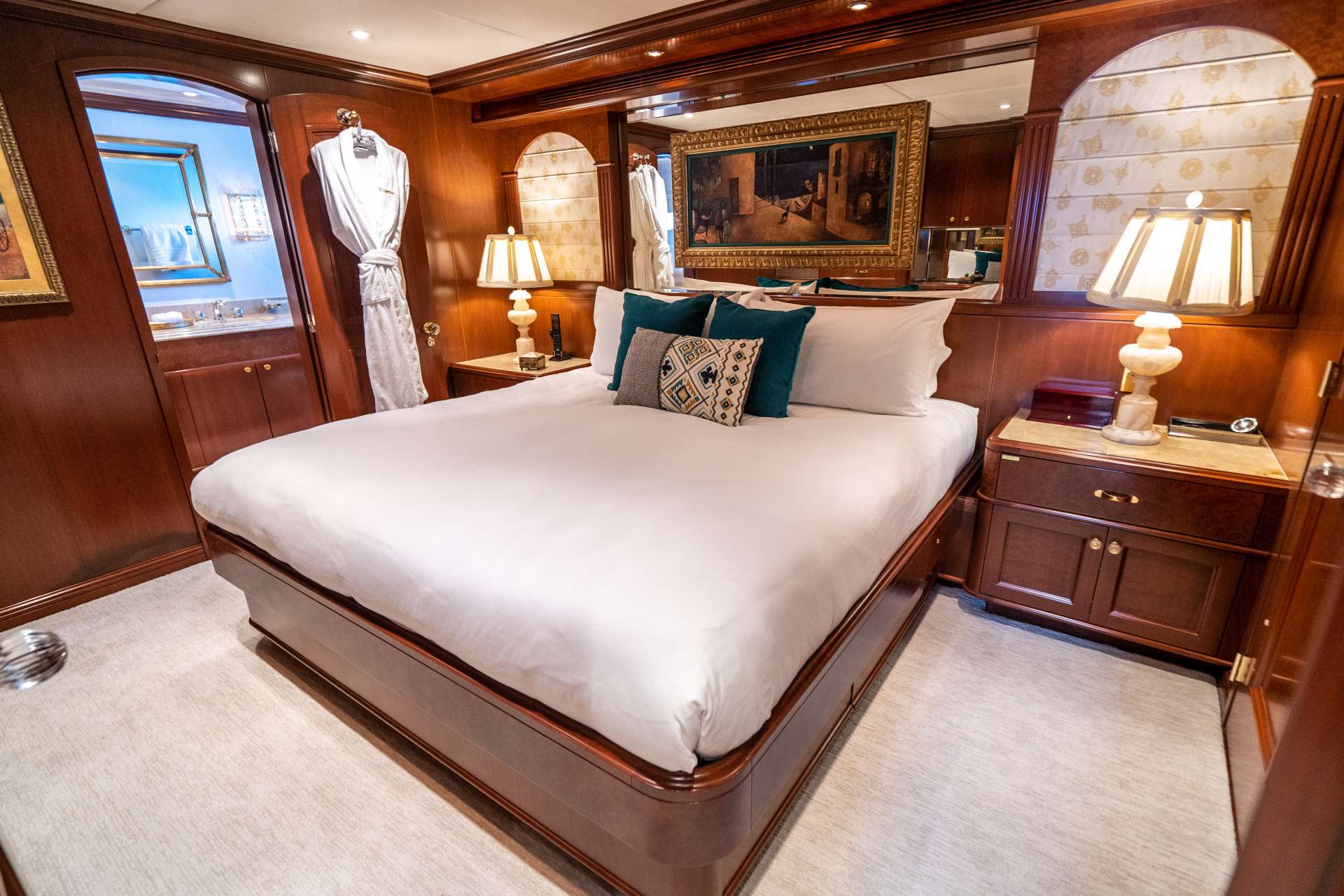 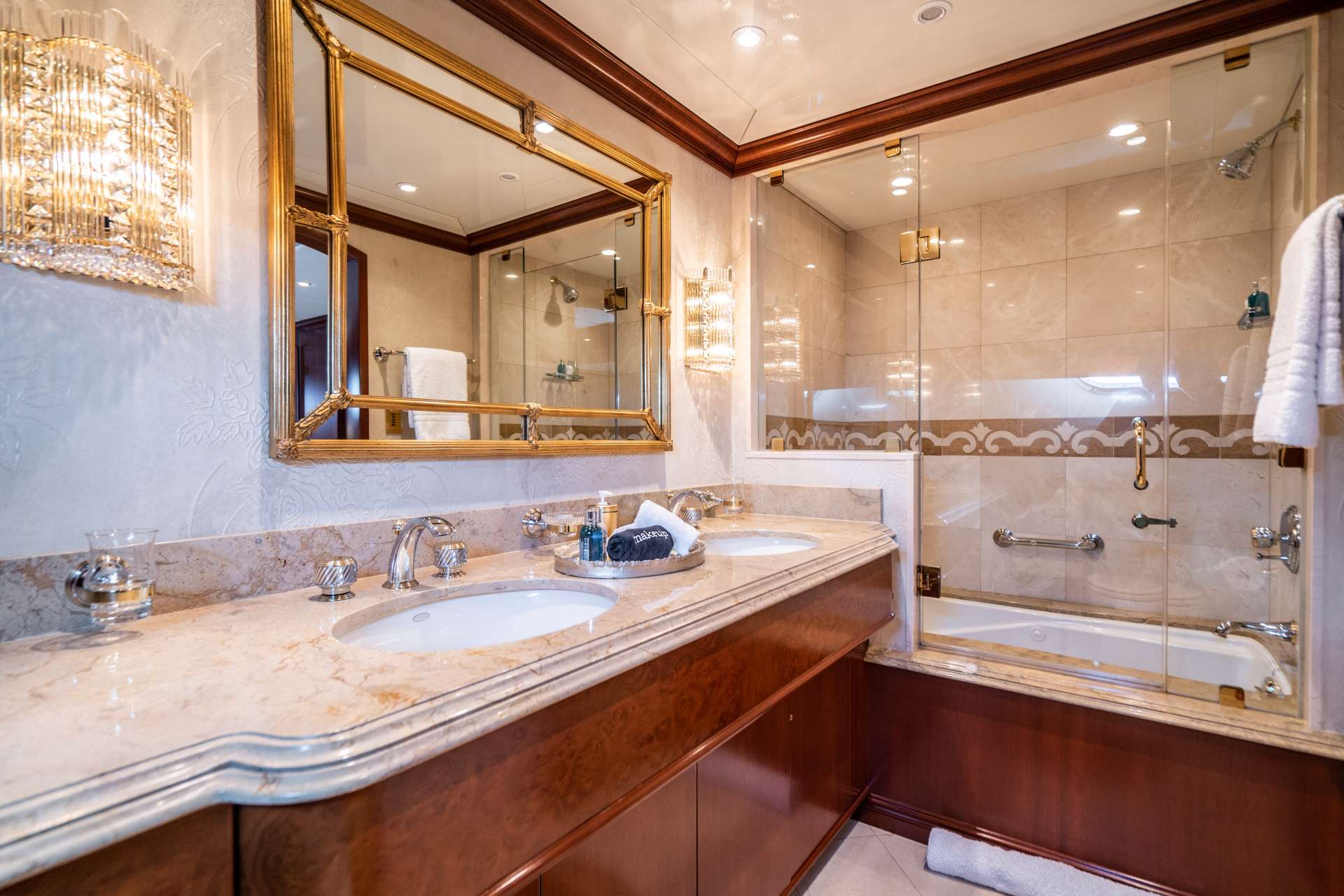 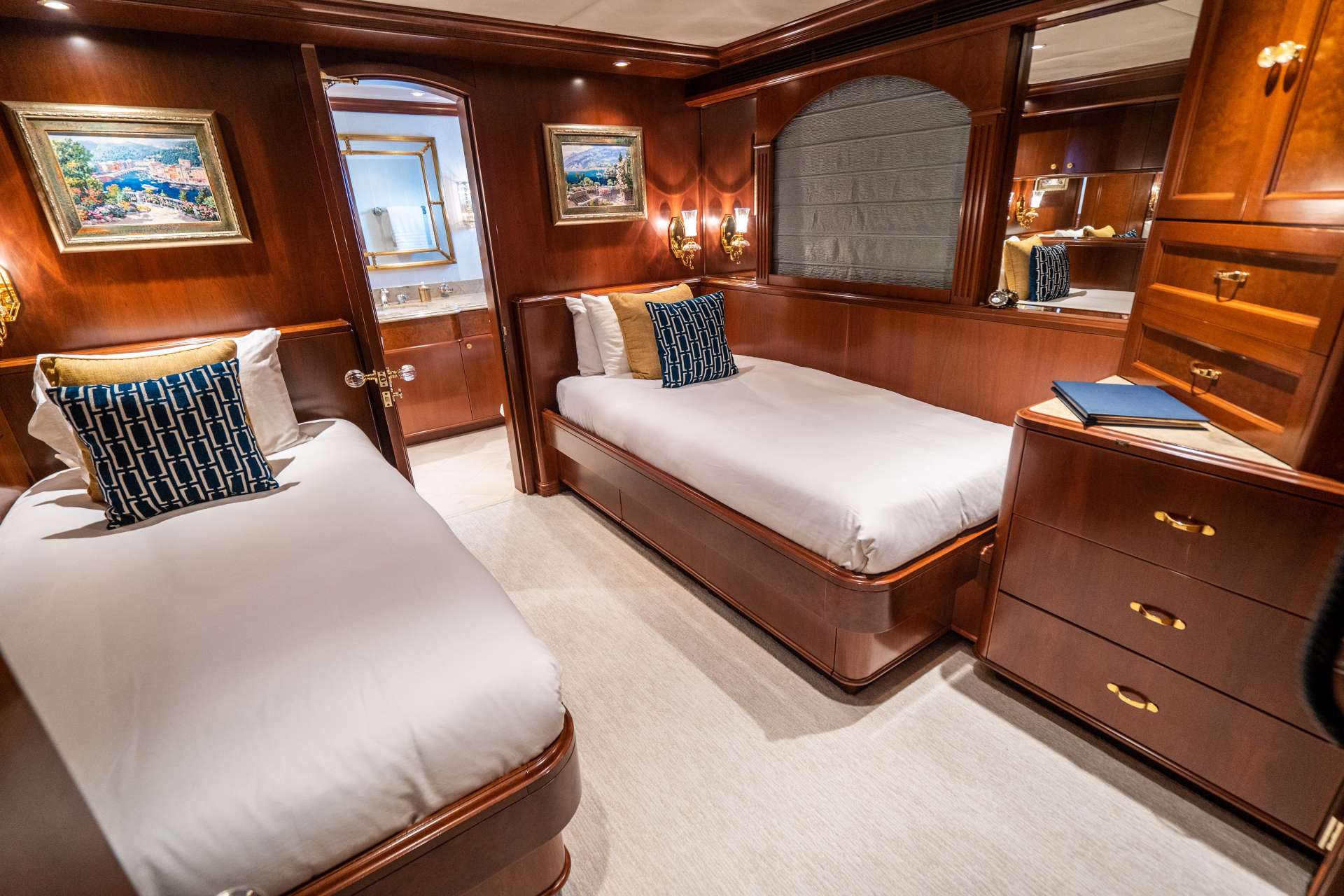 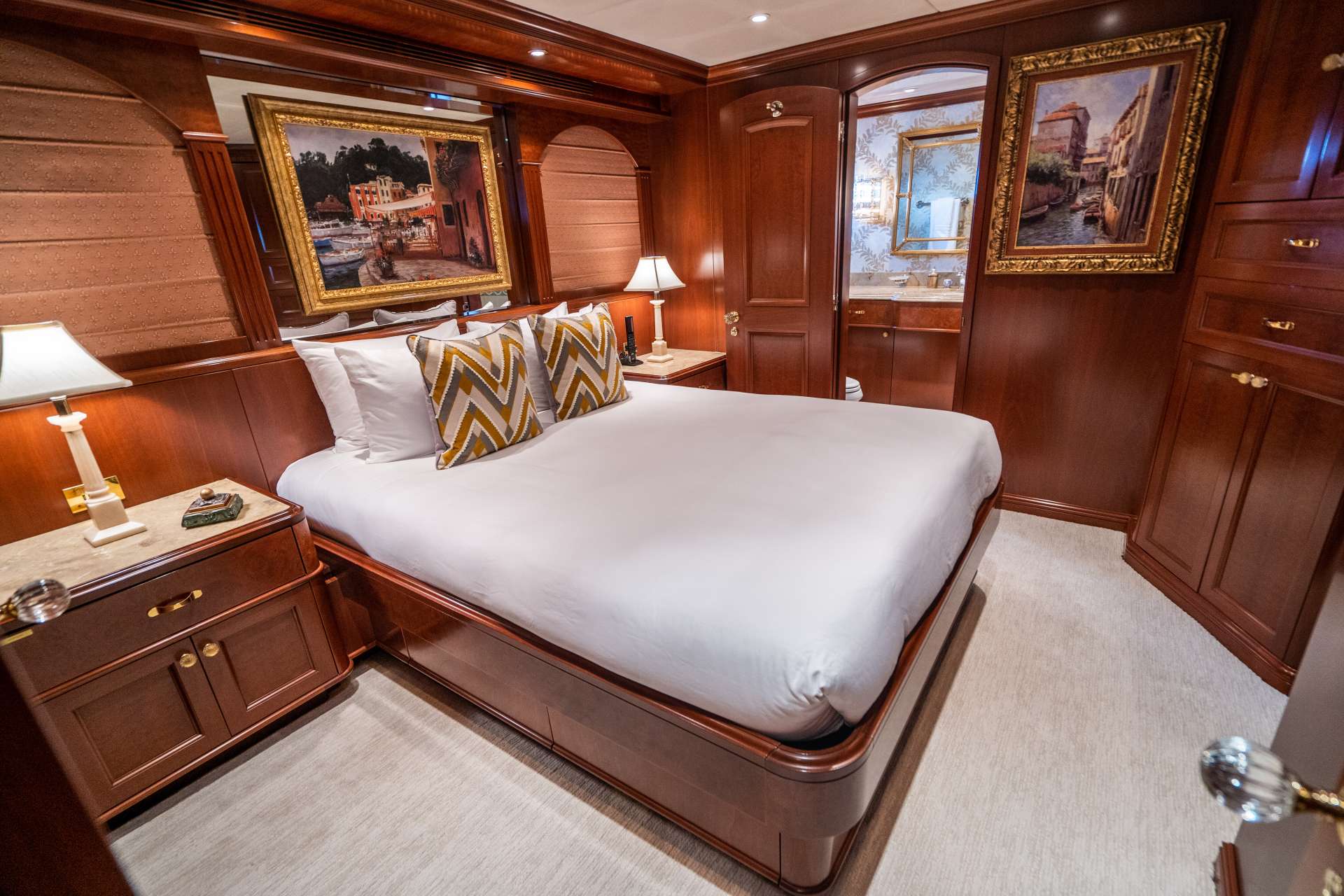 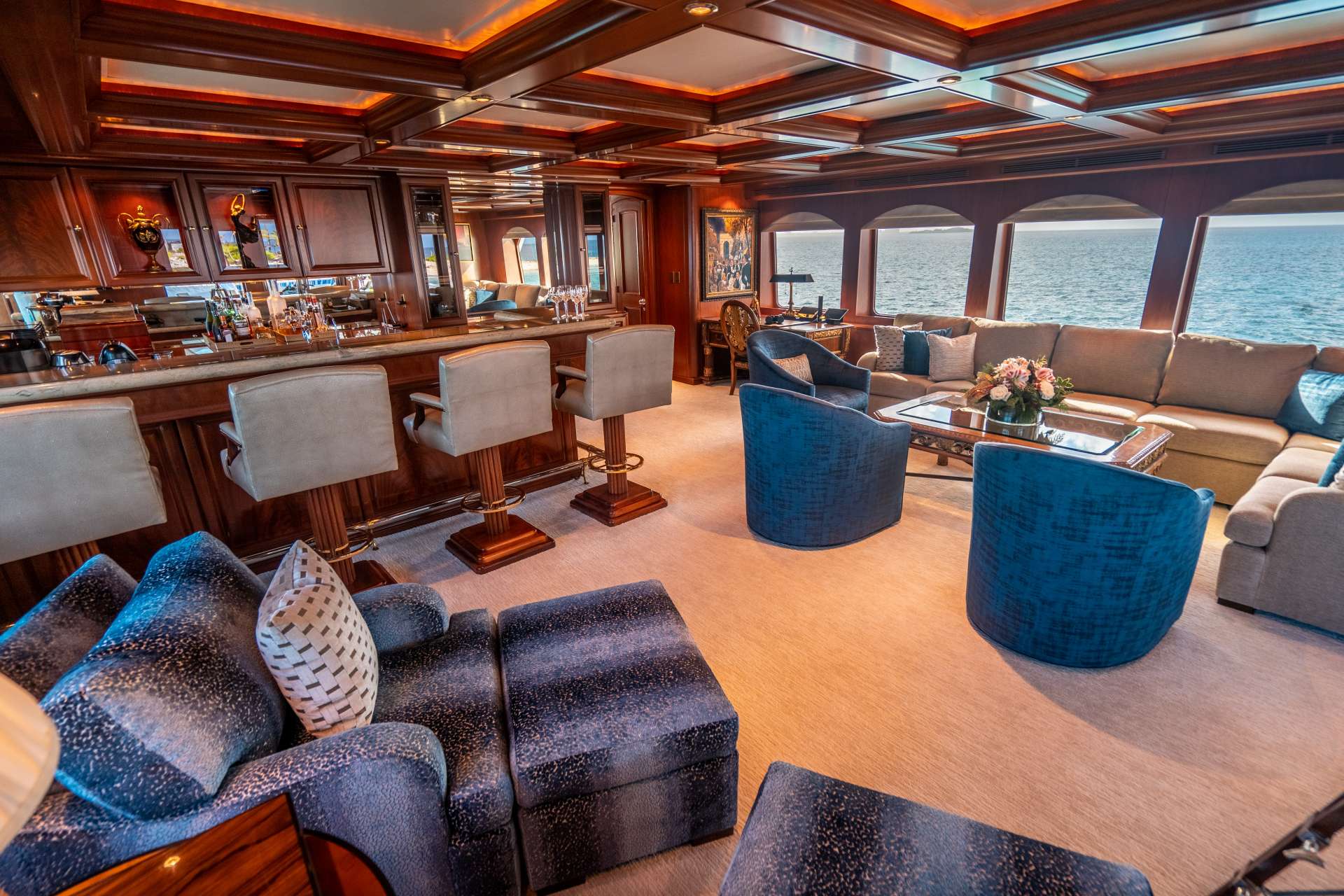 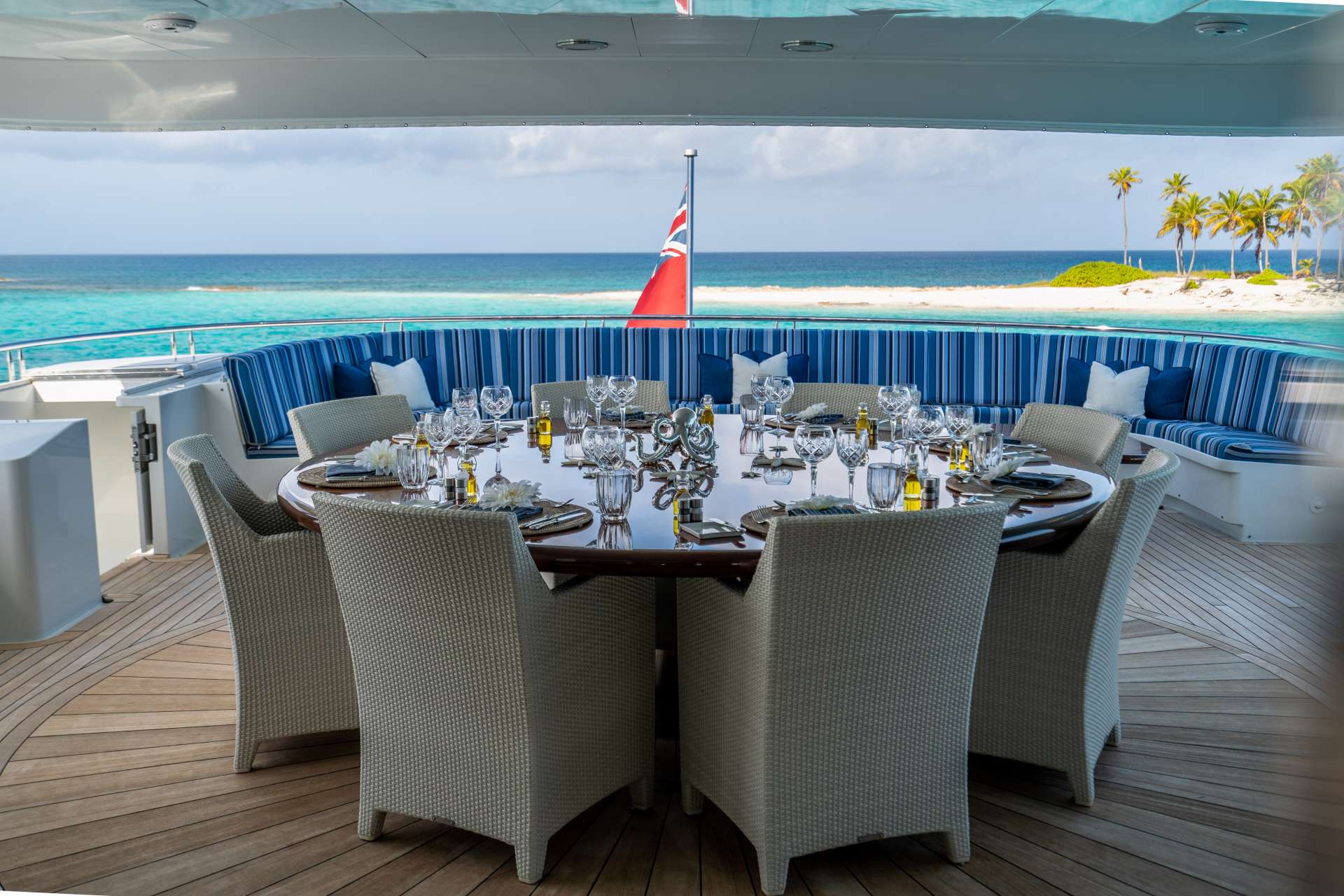 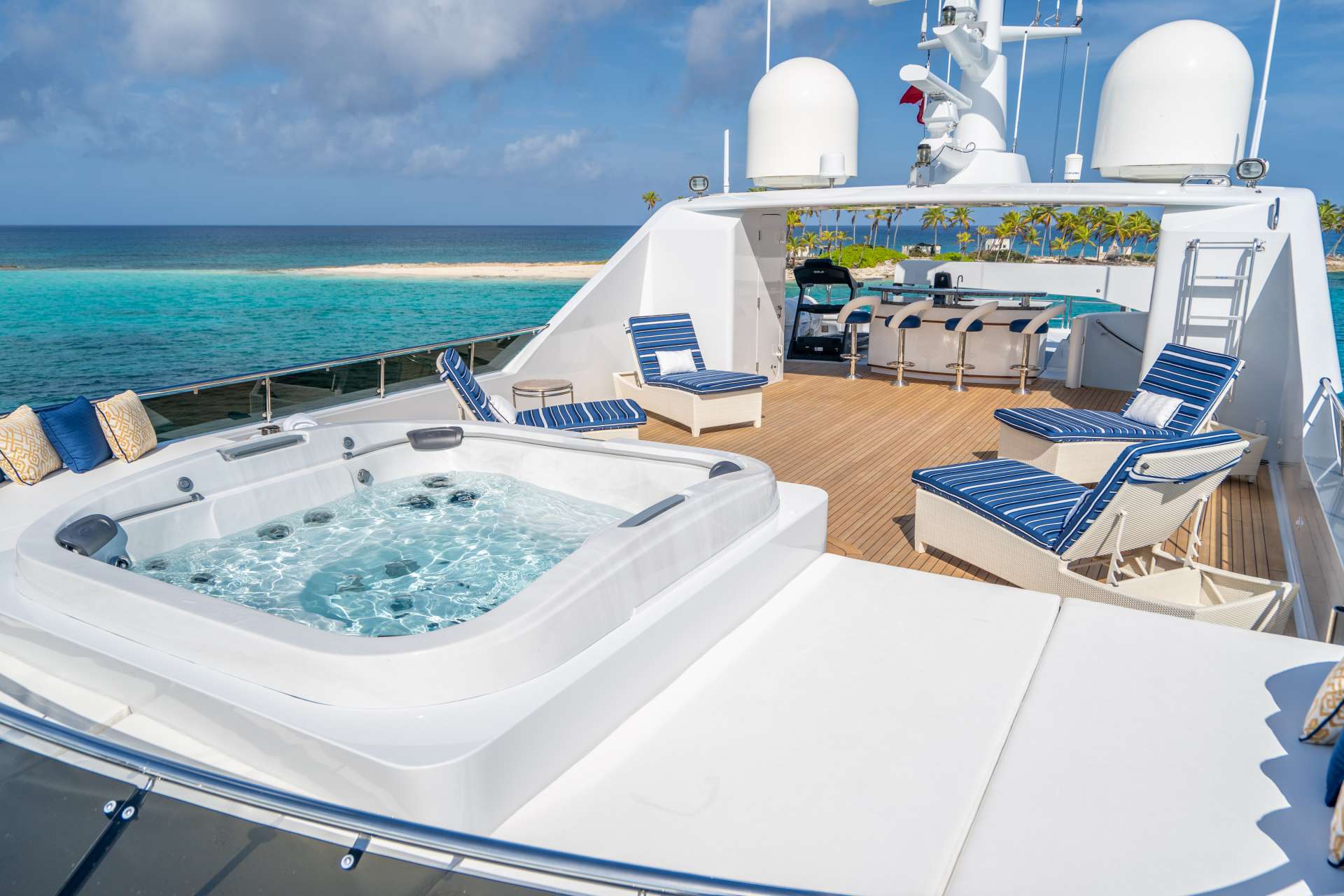 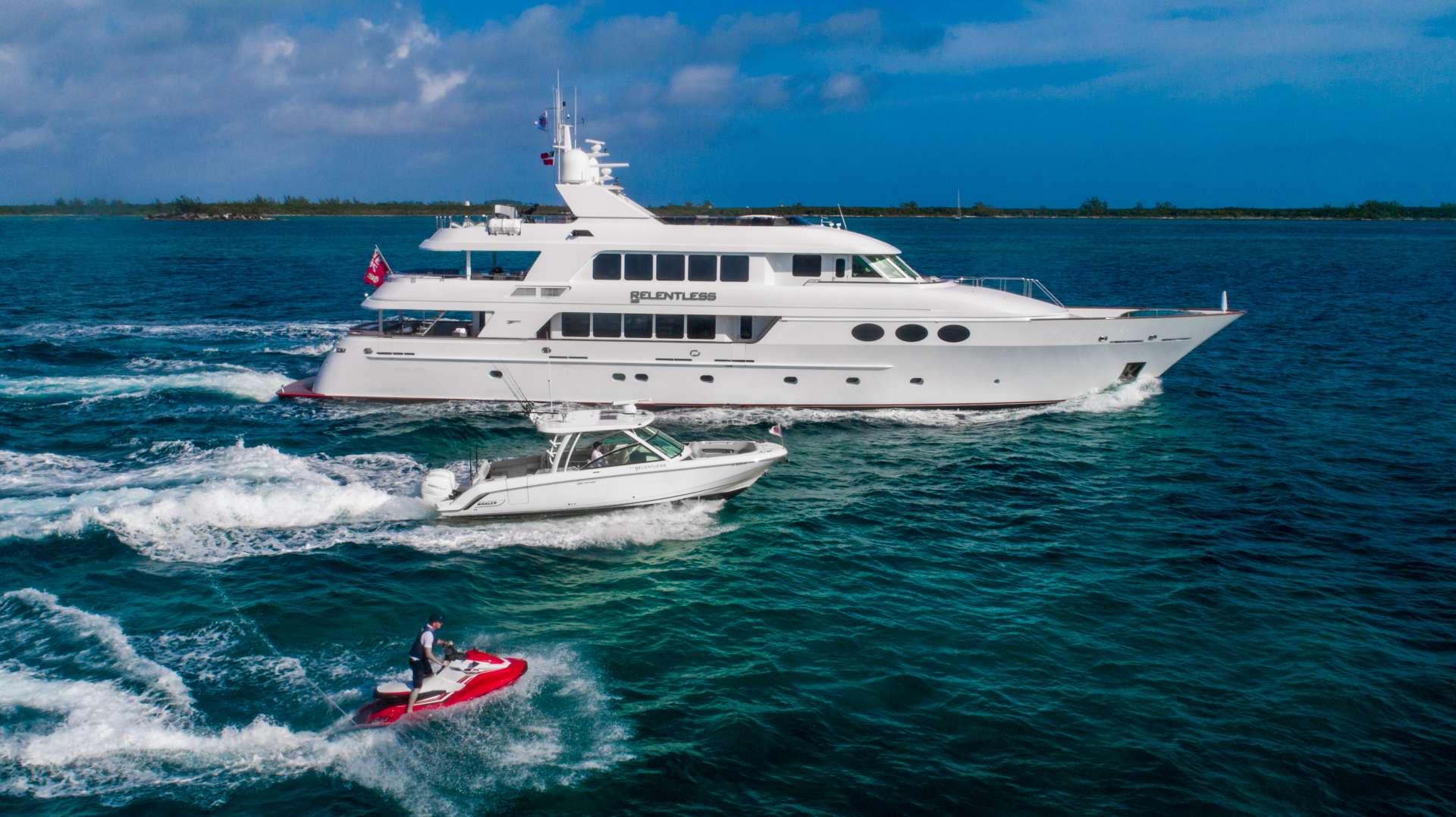 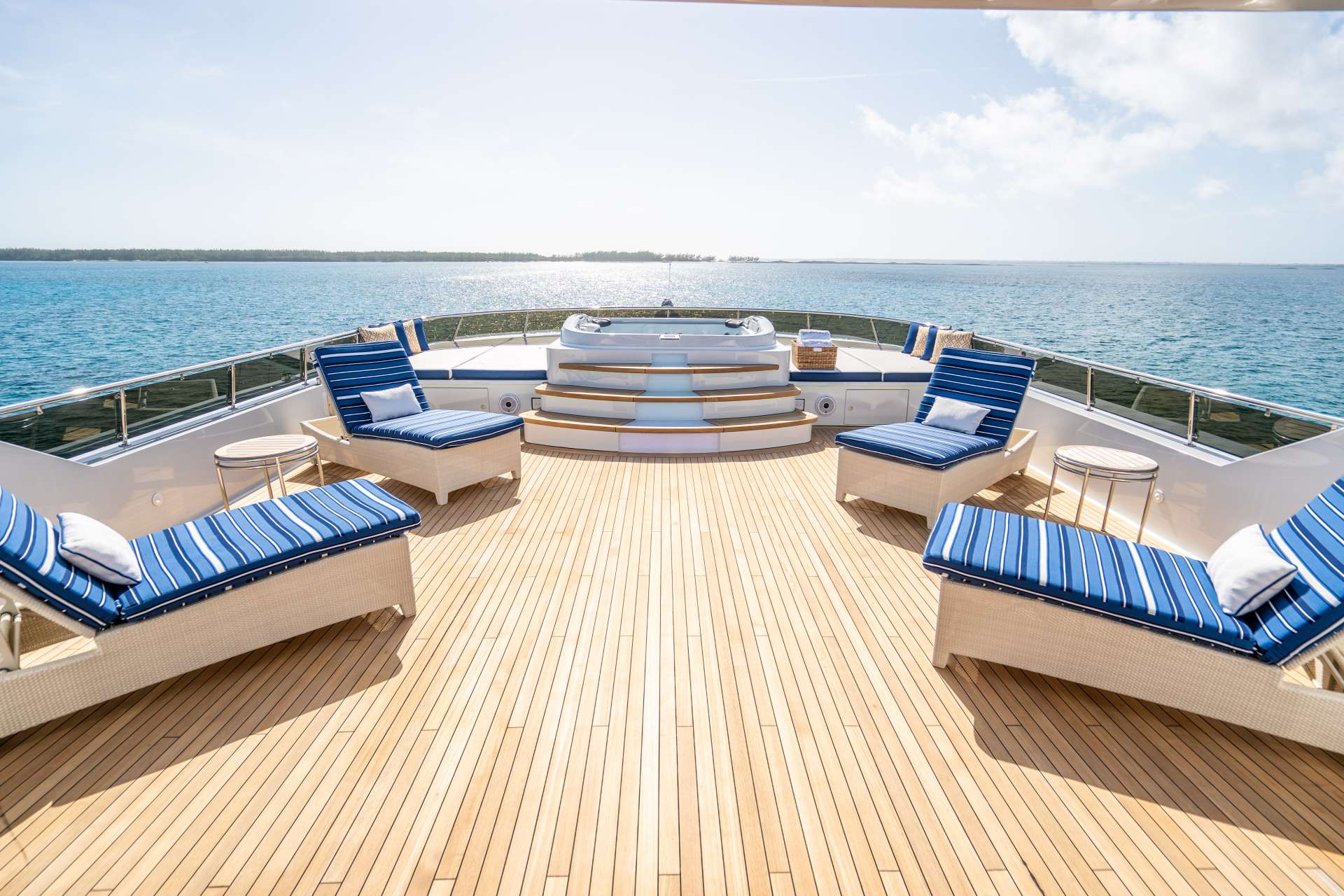 10 guests, · 0 Showers, · 0 Wash Basins
https://charteryachtrelentless.com Elegance meets power with this solid and artfully constructed 145′ Trinity Yacht. After chartering her for five years, the current owners purchased Relentless in late 2018 and have enjoyed upgrading and refitting her. Come relax in the impeccable craftsmanship of her exquisitely designed, soft beige and gold-accented interiors. Opulent dining, spacious interiors, and panoramic views will take your breath away… pampering awaits. Her main salon includes a sit-down bar aft, salon area with entertainment and a separate private formal dining room where the chef’s culinary creations are waiting to delight. Relentless features five lavish staterooms including a king master suite located on deck with his and hers bathroom to include a large shower and Jacuzzi tub. Four additional guest staterooms are located below, which include two king staterooms, one queen and one twin, all with en-suite bathrooms, full entertainment systems and large closets for storage. The sky lounge offers a comfortable gathering area to watch movies, enjoy afternoon treats from the chef and is a popular guest area. Step outside to experience our three spacious decks and submerge yourself in 360 degrees of breathtaking vistas. All decks feature ample seating, tables and chairs for socializing and dining. The spacious sky lounge deck features a large round table where many theme parties are held. The crew of Relentless have a huge assortment of fun filled themes from fun to formal and anything in between. If you’re feeling invigorated, Relentless offers a treadmill and full assortment of gym equipment for outdoor exercise on the newly refit flybridge. The flybridge was reconfigured with a new Jacuzzi, wraparound sun beds, lounging furniture and new sit-down bar as well as a movie night option under the stars. Relentless offers a full list of water toys for your fun and adventure and has a proven charter crew of 9.

CAPTAIN - Michael Mullen
Before joining Relentless, Michael was the Captain for the Hollywood celebrity, Merv Griffin, and cruised in North America, Canada, and Europe with him for fifteen years. Prior to that he sailed a 54M motor yacht across the Pacific and worked in Malaysia, Singapore and Indonesia. He grew up in England and began a career at sea as a fisherman in Scotland and later worked in the Oilfields of the North Sea, eventually becoming a Captain on Oil rig boats in the North Sea, Africa, Brazil, and Caribbean. He has been in yachting for over half his nautical career and has worked on yachts up to 100M. For the last 9 years he has spent his time as Manager and Captain of Relentless, mainly cruising the ports and anchorages of the Bahamas and Caribbean.

FIRST OFFICER - Oli Gillespie
Oli hails from London, England, and has been in the industry now for 10 years, long enough to have earned his Master’s ticket on yachts and stand in as Captain on occasion. Like most of us, he discovered the business by accident but with a love of the water and water sports, plus a penchant for travel, he has excelled in the industry. Oli is now a family man, with a wife and new son in Florida, and enjoys working on classic cars (a 1976 Datsun) and following his favorite English football teams when time permits.

CHEF - Max Biasiol
Max’s passion for food led him to pursue professional training since 1984, He has been professional yacht chef for the last 12 years. Max is very comfortable with Mediterranean cuisine, with an emphasis on delicious Italian food. He also has a strong flair for Asian culinary traditions, blending the two cultures effortlessly on a plate. While working on a yacht in Thailand, he took the opportunity to learn to cook local cuisine and also trained in Japanese cuisine.
With a background in TV journalism, Max has now published three novels in Italian.
Max has worked on EMOTION² for many seasons and he has been recruited by the current owner of RELENTLESS to be on board as their new chef! When chef Max is not in the galley preparing your next meal, you will find him with his camera in hand, reading or relaxing watching a movie. He is fluent in English, Italian and French.

CHIEF STEWARDESS - Simone Seckington
Simone is from England and lived in Spain and Italy where she began working on yachts and her stewardess career. She returned to England after a while to attend University where she received a Degree in Communications and Audio-Visual Production. Later she moved to Florida and once again returned to yachting, where she excels in planning and executing elaborately themed productions for your pleasure when time allows and guests would like. She loves animals, enjoys fitness activities, and cooking at her new home in Fort Lauderdale.

CHIEF ENGINEER - Paul Lyndon (PJ)
PJ has roots in both the UK and New Zealand and has a background in avionics and engineering acquired while serving in the Royal Air Force in England. He is fully licensed and has spent several years working on many major yachts in the United States and Europe. At one time he was a DJ in the UK and now is the lead person in the Audio Video and entertainment side of Relentless – Karaoke anyone?
He loves to show off his engine room so please ask if you would like a tour!

BOSUN -Christopher de Mouilipied
Chris is from the Isle of Wight on England’s South Coast and has been in yachting for the past 6 years, the last of which has been on Relentless. During that time, he has sailed over 30,000 miles across the Atlantic and Pacific Oceans working on large sailing and motor yachts around the world. He is now pursuing his Officer of the Watch qualification and looking forward to moving up the ranks of his chosen profession. He enjoys travelling, running, Cross Fit and watching sports.

STEWARDESS - Annerize Bezuidenhout
Annerize was born in a small town called Beaufort West in South Africa, but she grew up and went to school in the Eastern Cape. During this time, she found a love for hiking and exploring the country of South Africa, whilst appreciating the local vineyards and food markets. She moved to Johannesburg when she was 22, where she found a job as a Bookkeeper but after a few years the travel bug bit, and with her passion for travelling she joined the yachting industry where she is very capable and always has a smile on her face. In her spare time, she likes to dive and explore the sea and hopes to discover many more dive sites around the world to explore.

STEWARDESS - Geneva Jolley
24 and from the UK, Geneva is from a popular surfing town called Newquay on the South Coast. She began her hospitality career there, working in beach bars and restaurants with people from all over the world. She began travelling at a young age and trained as a yoga teacher in India before heading to Sri Lanka and other places.
Geneva enjoys cooking, volunteering, surfing and hiking and when she has the opportunity finding the best local vegan cuisine. She has been in the industry for 2 years and comes to Relentless from the Mediterranean, having decided to expand her yachting horizons and combine her love for the ocean, hospitality and travel.