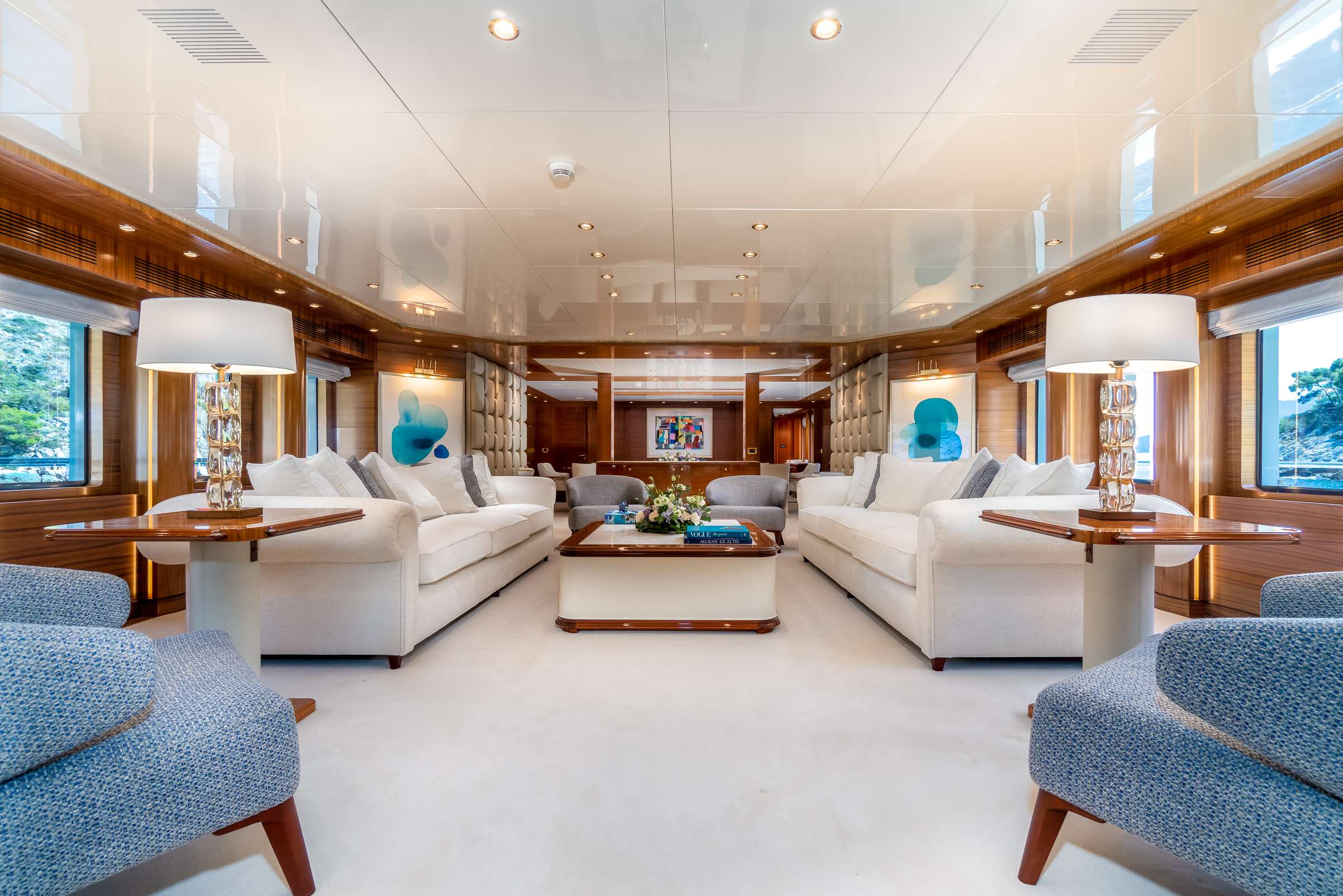 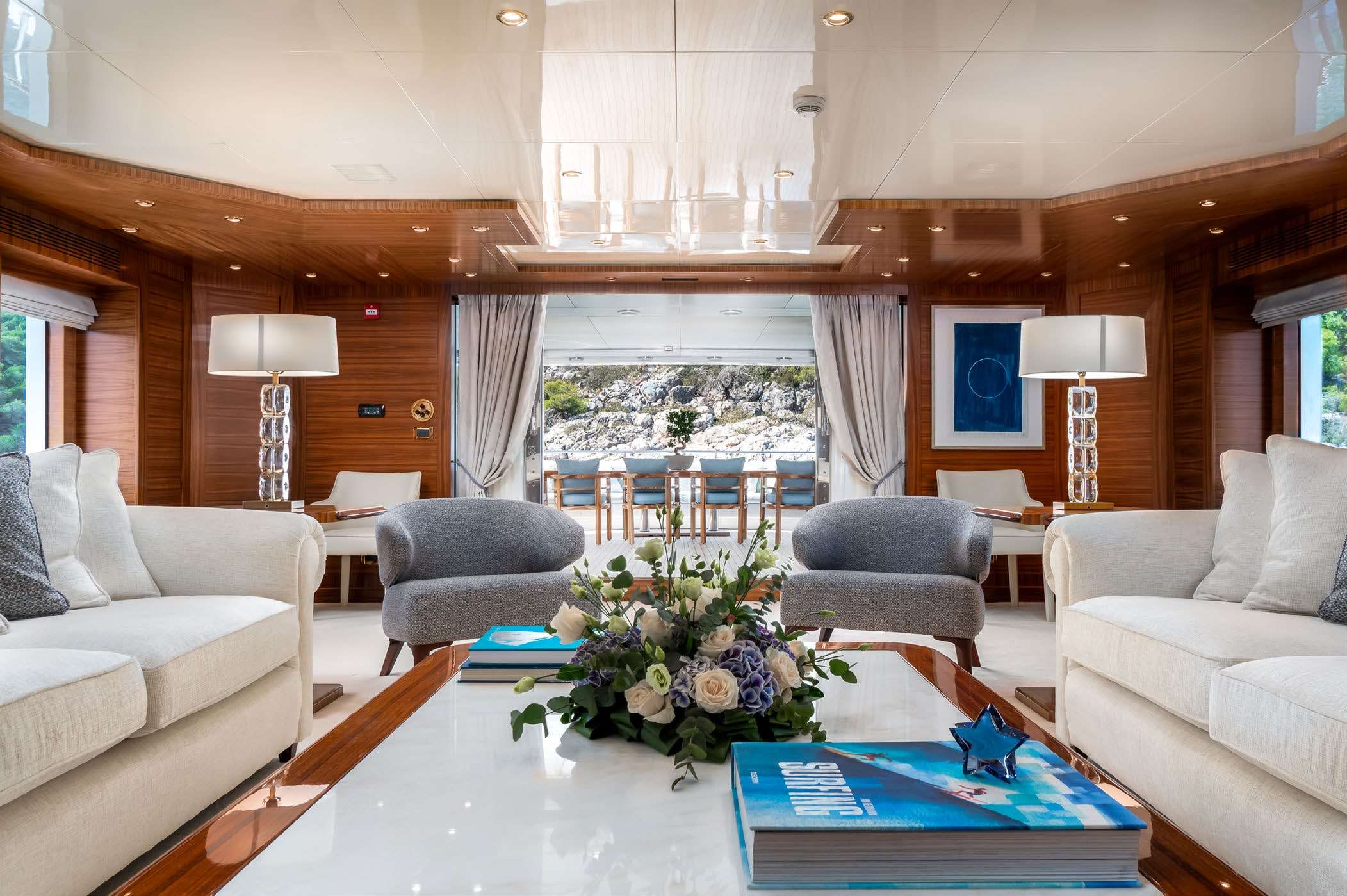 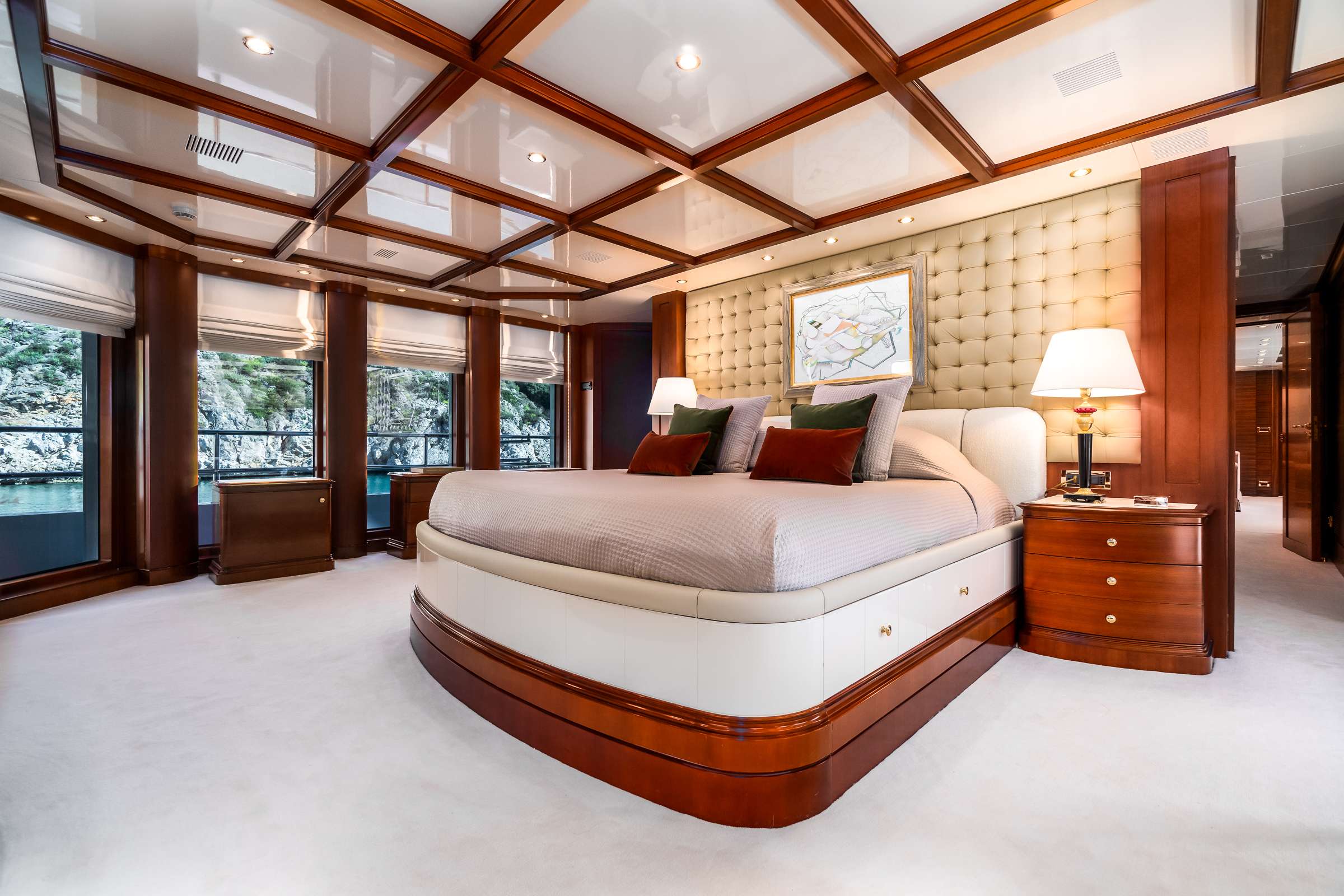 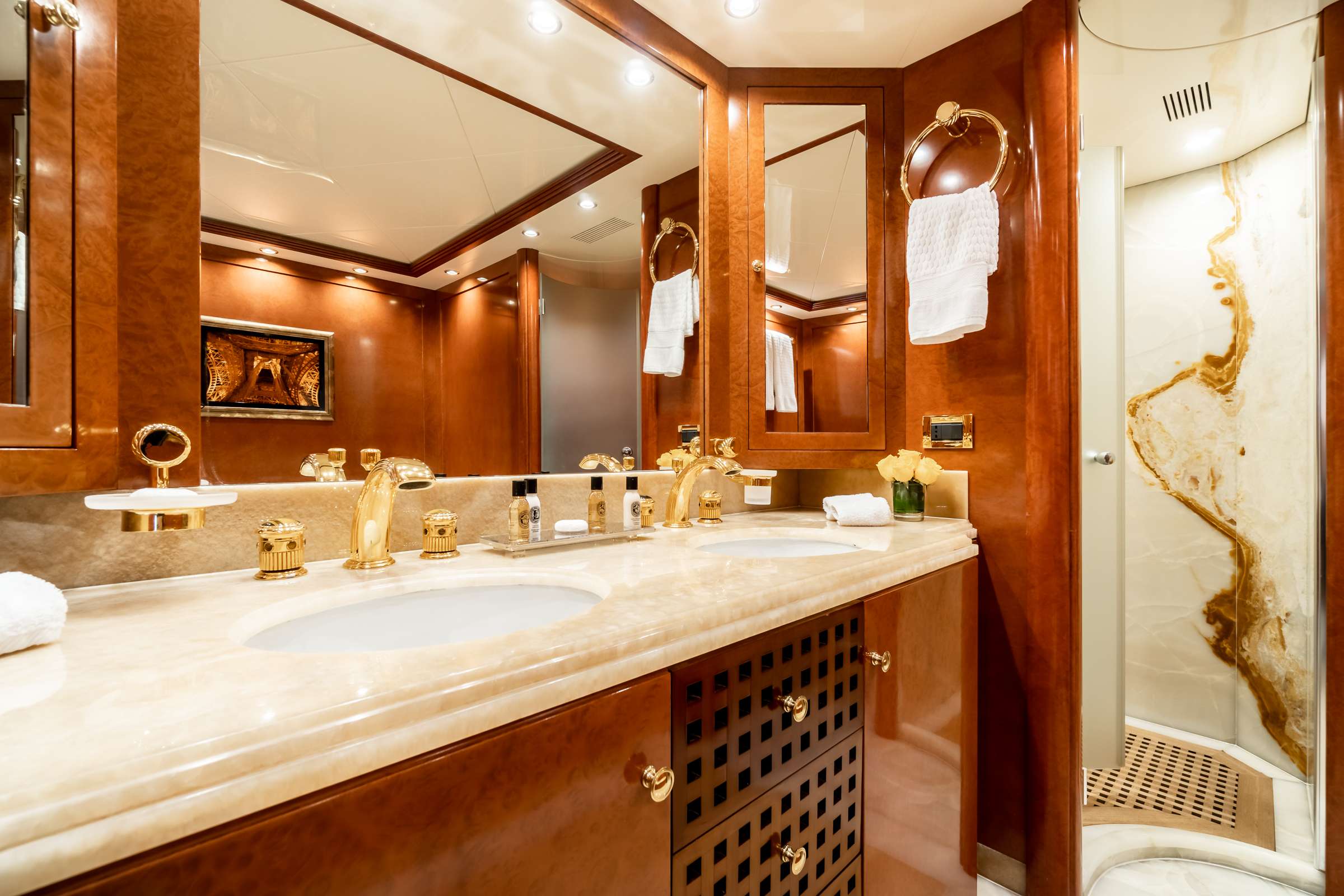 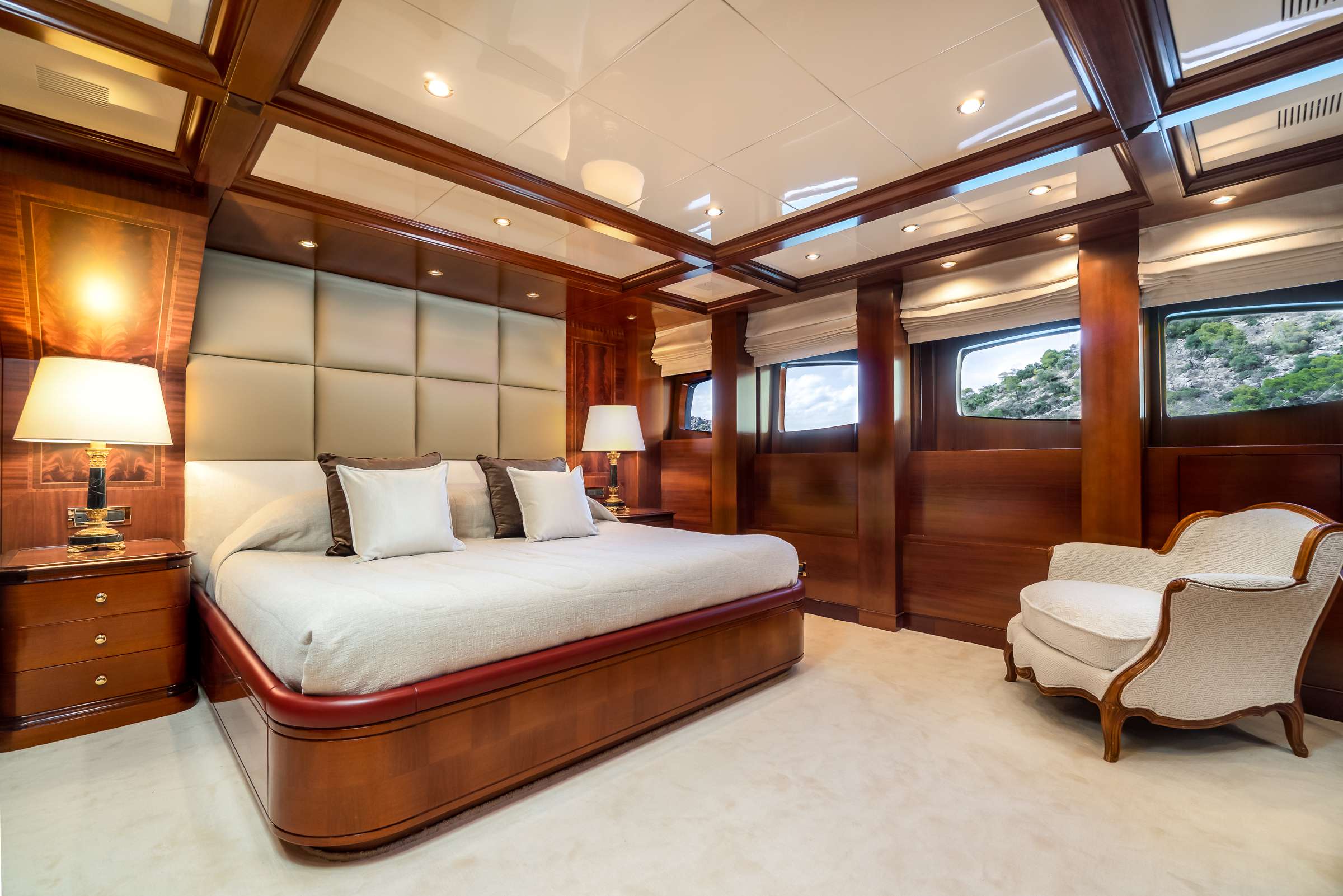 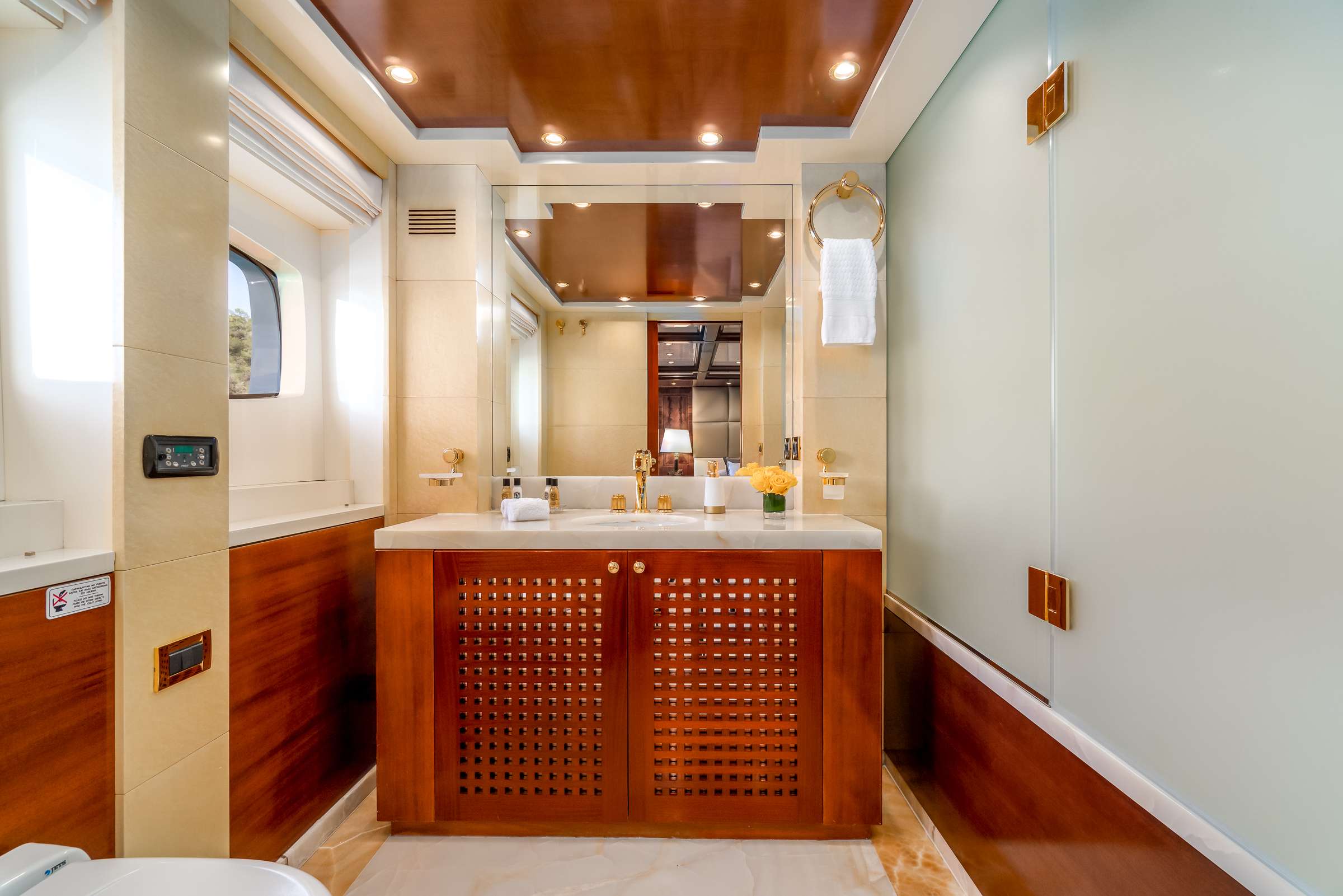 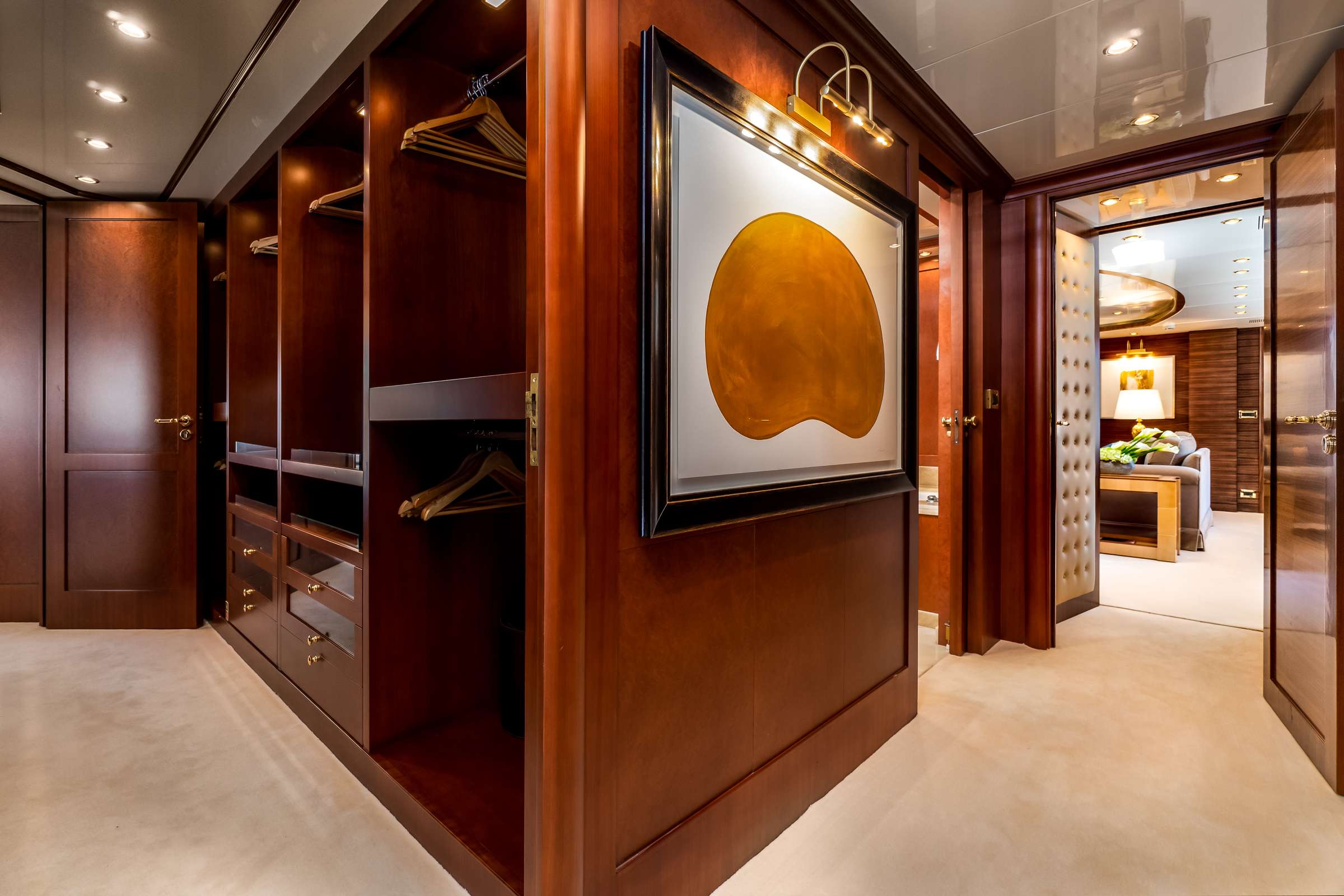 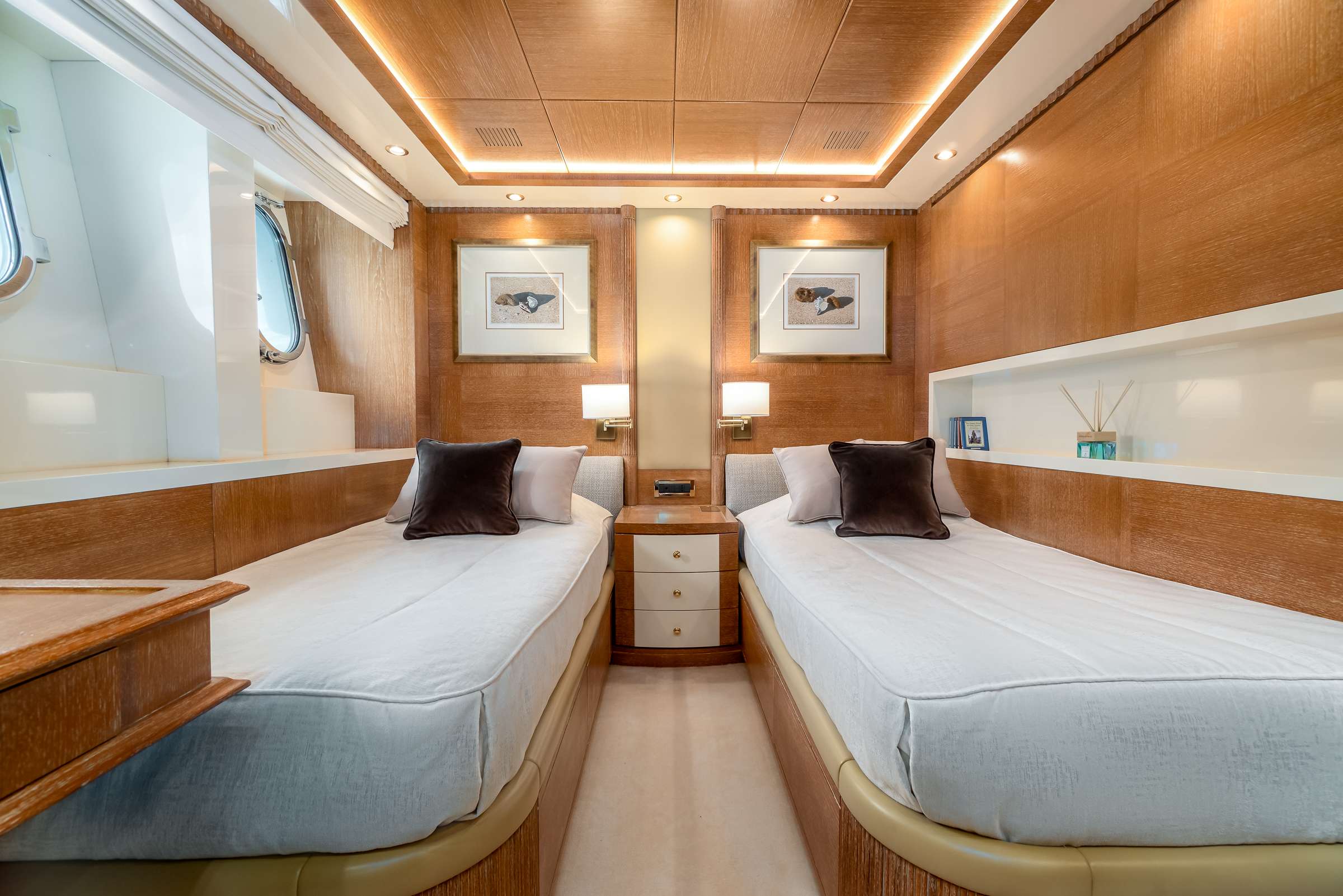 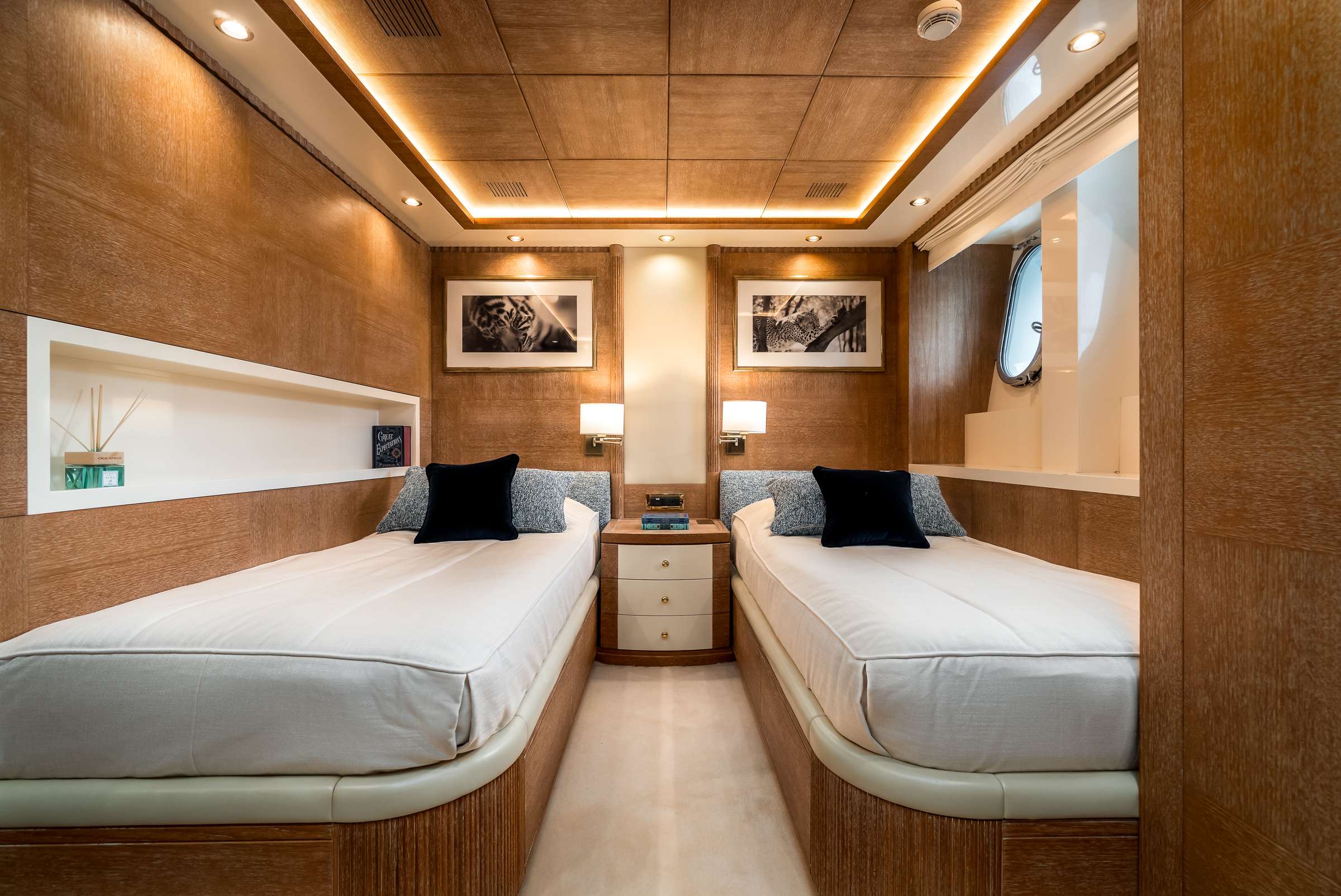 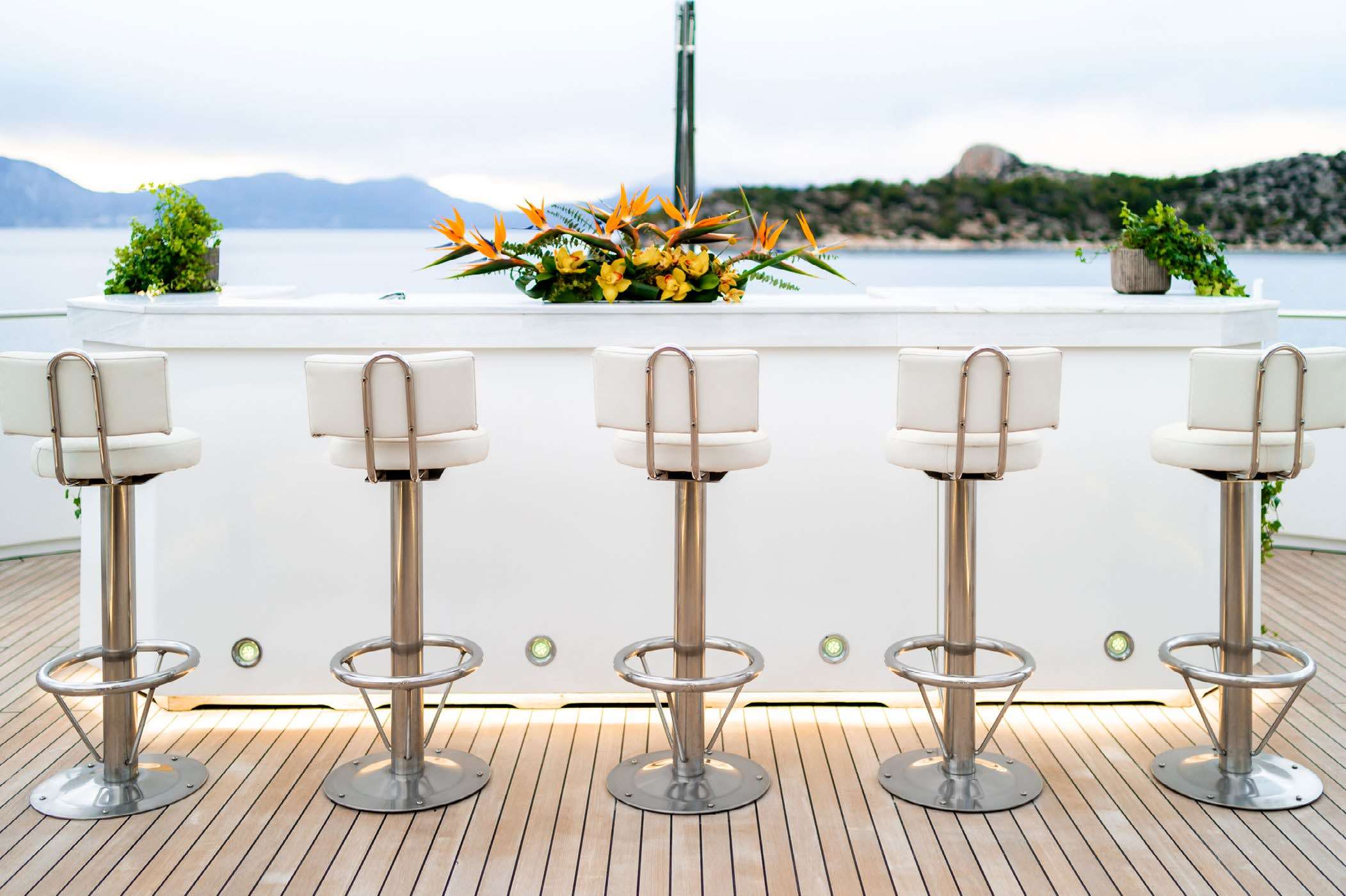 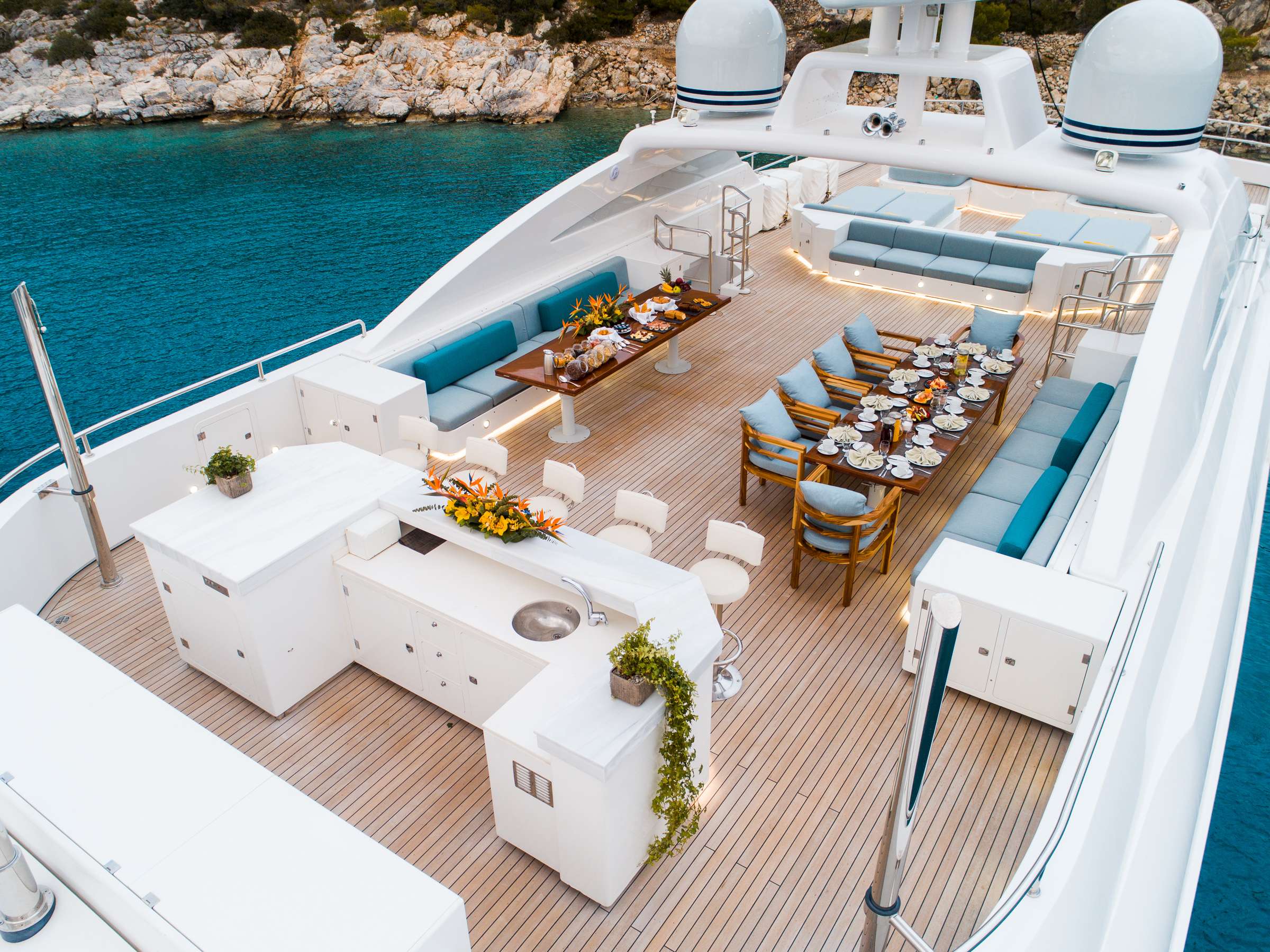 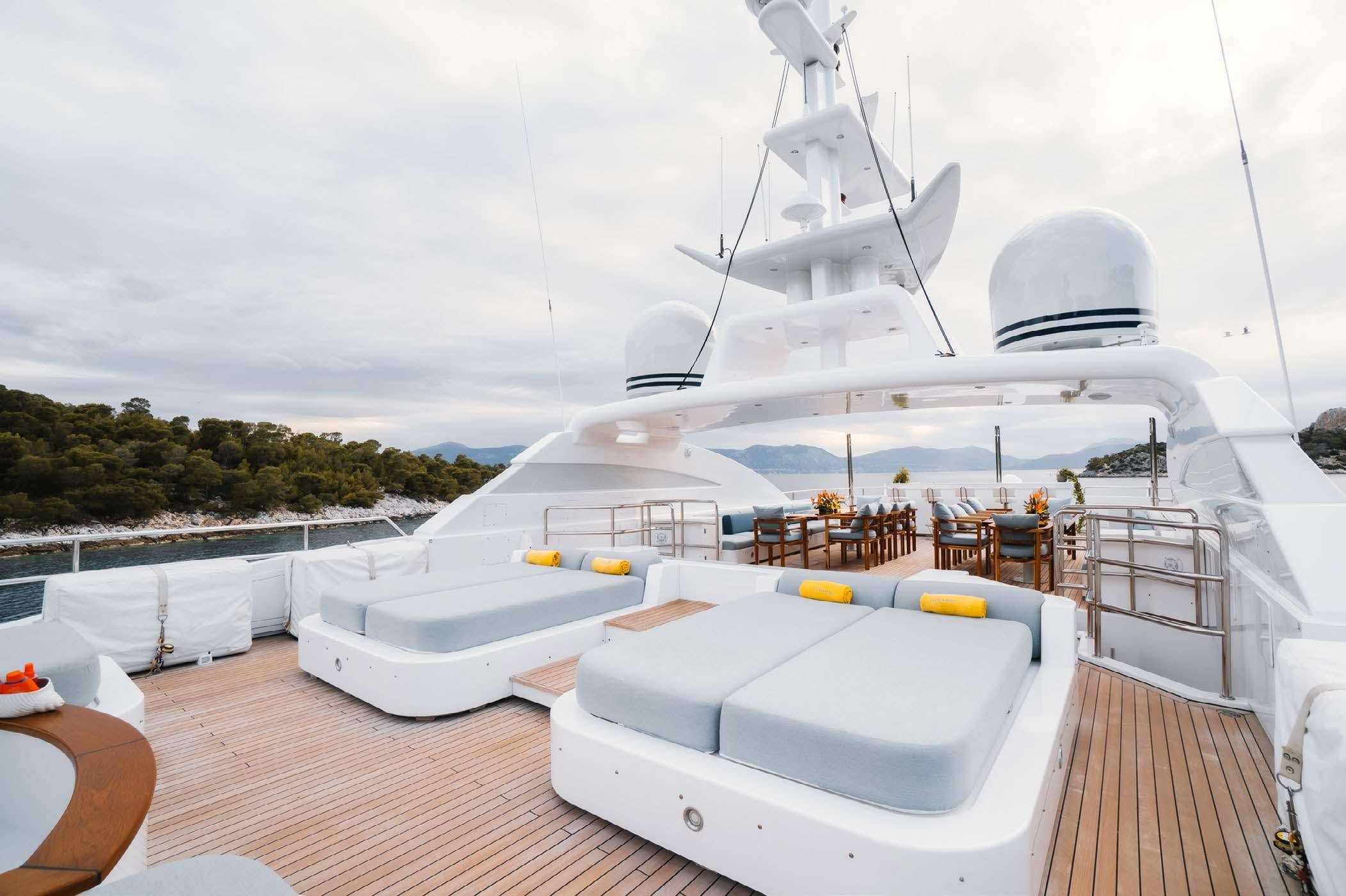 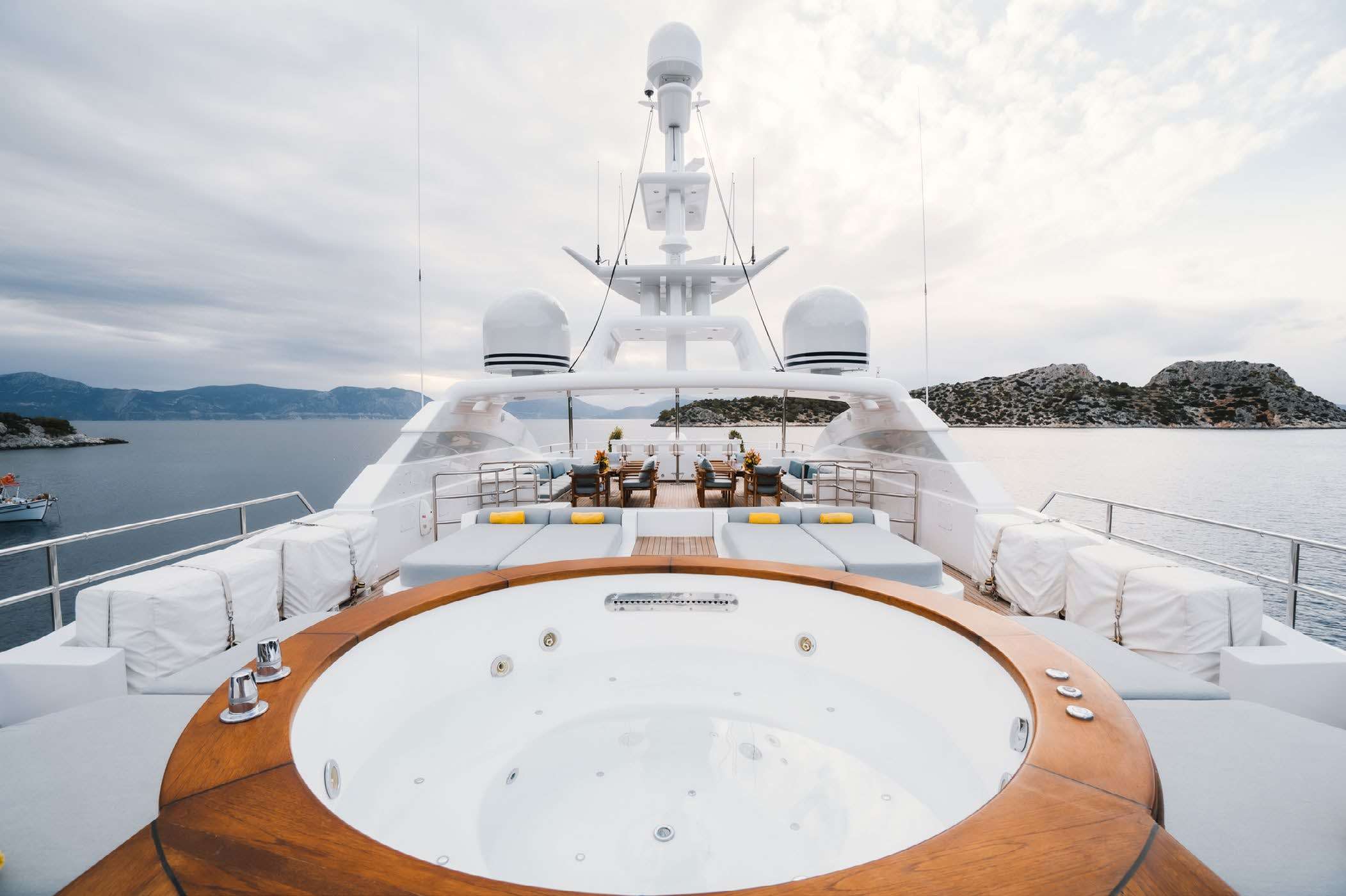 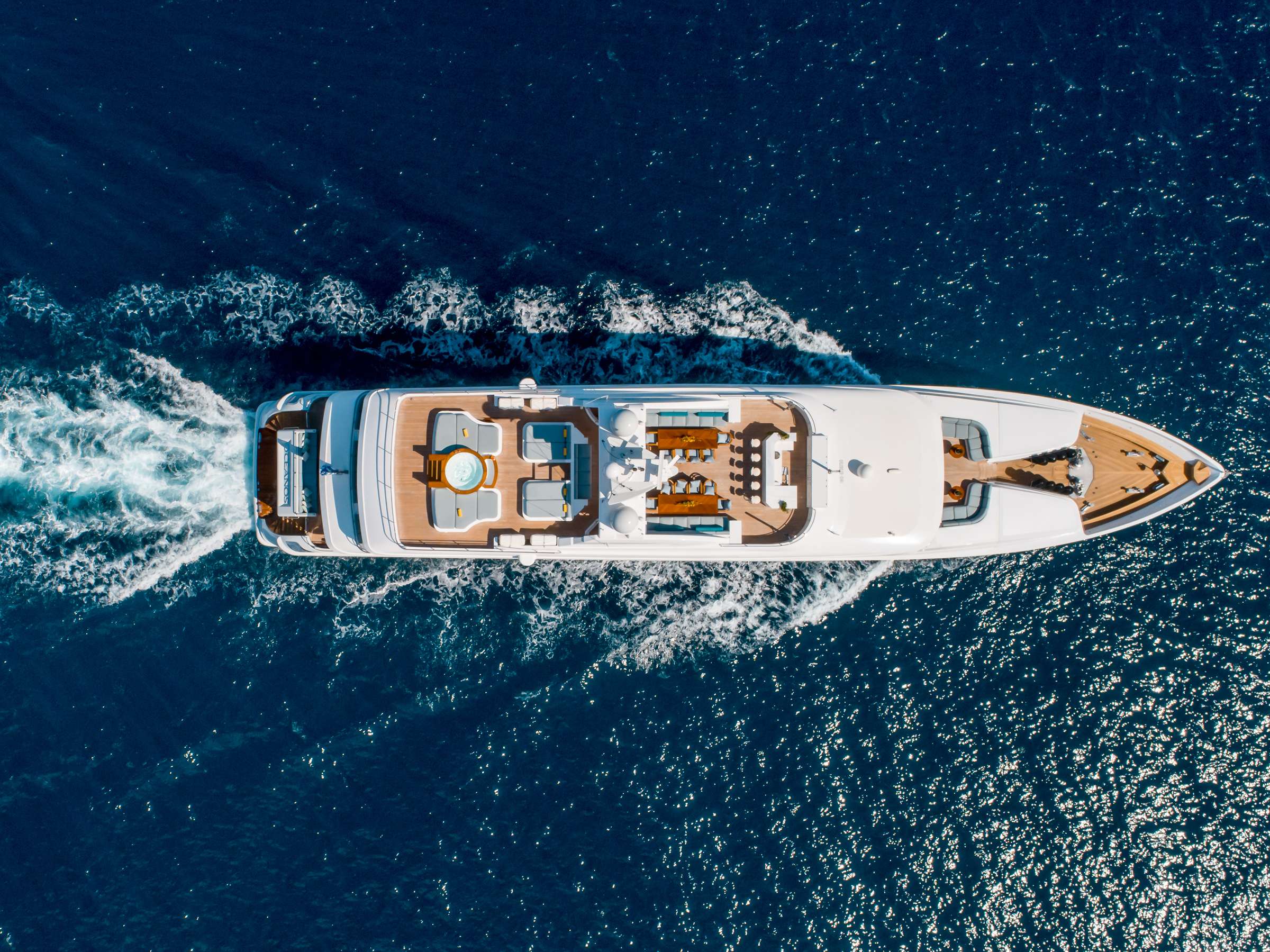 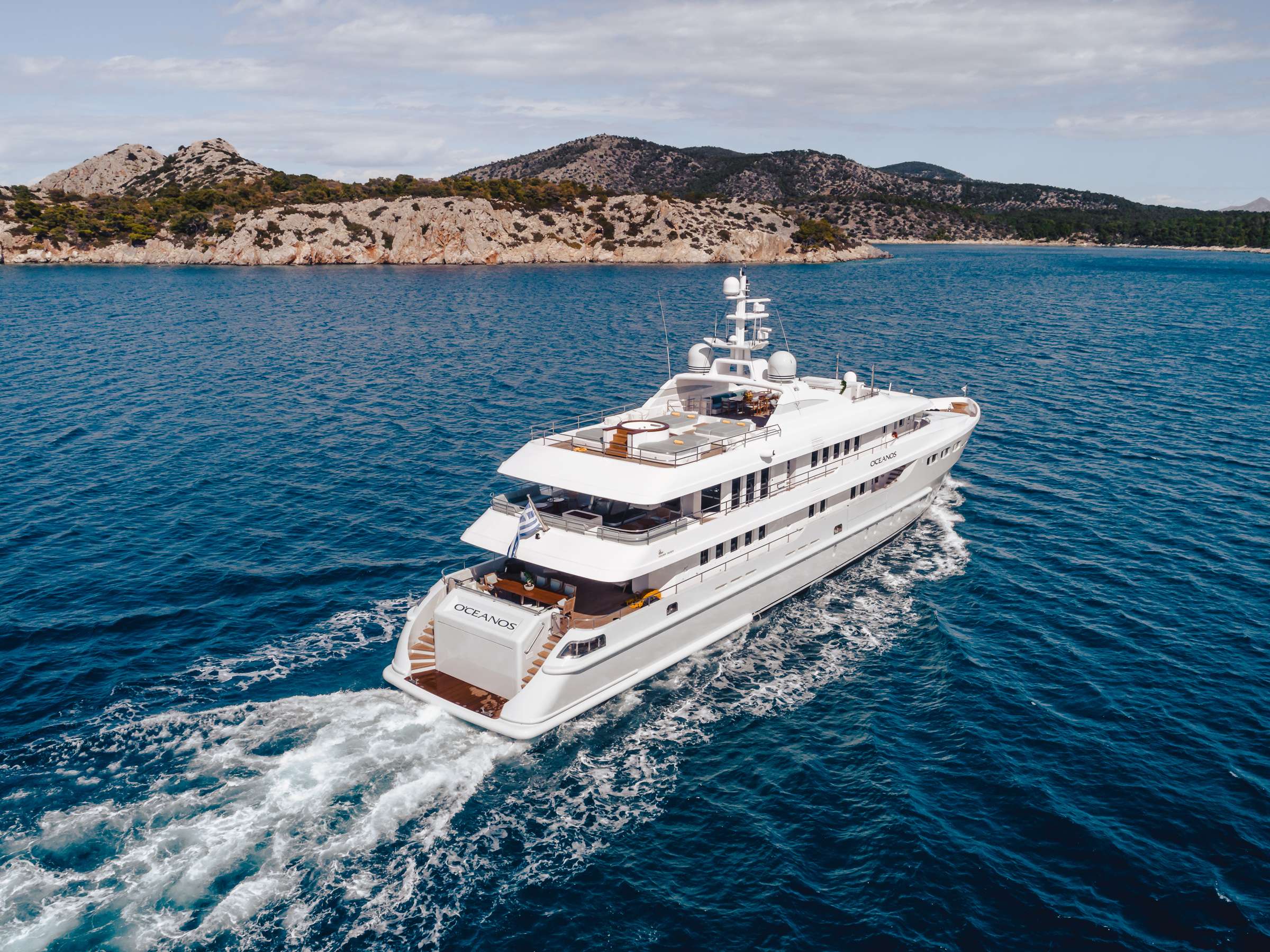 12 guests, · 0 Showers, · 0 Wash Basins
A familiar name on the charter circuit OCEANOS is now available with a 2021 refit and a new multi-national crew. OCEANOS offers over 300 square meters of deck space and many interior gathering areas. A tasteful Studio Vafiadis interior is fitted with Italy's finest woods, marble and fabrics, creating an environment of refined elegance and sophistication. Her sweeping sundeck boasts large lounging beds and Jacuzzi as well as a bar and two long dining tables, perfect for those lingering meals under the stars. Accommodations are comfortably set for 12 guests in 7 well-appointed staterooms including a private owner's suite which spans two thirds of the upper deck. Further accommodations include a VIP Queen stateroom and adjoining twin cabin on the main deck, whilst on her lower deck you will find an additional 2 Queen and 2 twin Staterooms with Pullmans.

CAPTAIN | Scott Schwaner | American
This September marks 40 years in Professional Yachting for Captain Scott Schwaner. Originally from New Orleans, Scott grew up sailing and racing competitively. Cooking was another passion that began early in his life. Having completed two formal apprenticeships, Scott became Chef of the Sazerac Restaurant at the Fairmont Hotel in New Orleans and Chef de Cuisine of the city of New Orleans at age eighteen. Winner of the very first Concours du Chef in Monaco, 1992, Scott is still the only certified Master Chef in Yachting. After several years in yachting, Scott turned in his sea time for his first 100ton captain’s license. Now holding his 3000ton Masters, Captain Scott brings his unique background and experience to M/Y OCEANOS. He is qualified and able to provide leadership and management in all departments onboard, creating a positive and highly professional atmosphere, while motivating and retaining his crew. His extensive cruising experience includes Europe, Asia, Alaska, USA’s Gulf and Atlantic Coast, Antarctica, and the Caribbean.

SECOND OFFICER | Martyna Chrosciak | Polish
Martyna was born and raised in a traditional polish house in the woods. To pursue her dream of traveling the world, she joined the Maritime Academy, where she graduated with a degree in maritime navigation. During her university career, she did an internship in SAR, emergency room procedures, and became a diver, which led to her specialization in maritime rescue. Since 2014 Martyna has gained experience on different types of commercial vessels and has finally settled in the yachting industry. In her free time, Martyna enjoys sports and music. She is always up for activities and adventures.

BOSUN | Mayer Rosso-Villar | Dominican/American
Mayer was born and raised in New York City to a family who immigrated from the Dominican Republic in the late 80s. Upon what seemed like endless winters, his mother decided to move to Florida just before Mayer entered high school. Mayer handled this transition well, occupying his time with football and percussion instruments. Shortly thereafter he attended the University of Richmond (Go Spiders!), majoring in Business Administration/Marketing and minoring in Music. During his college career, he began playing the guitar and piano while continuing his love for percussion, specifically Brazilian percussion. This passion led to his 8-month study abroad in Rio de Janeiro, where he learned to speak Portuguese extremely well, as he is already fluent in Spanish. After graduation, Mayer moved to San Francisco for 3 years where he worked in the investment world. Eventually, he got tired of sitting at a desk and moved back to West Palm Beach where he began bartending, went back to school for music, and eventually fell into the maritime industry. After working on a cruise ship in Alaska, he later moved into yachting where he sailed the Caribbean, New England, and Central America.

FIRST MATE | Sean Parr | South African
Coming from Cape Town, South Africa, Sean has always grown up around water, hence the appeal to pursue a life at sea. After leaving school, he spent a year and a half polishing up his management skills as a Yacht-Master Sailing Instructor around the challenging and exciting coastline of South Africa. He decided to leap into the Yachting industry and had the opportunity to work his way up to Chief Officer on yachts varying from 50-100m. He looks forward to sharing his love of the water and watersports with you while keeping deck operations running smoothly for your enjoyment.

CHIEF STEWARDESS | Chamoné Wendzich | South African
Born in South Africa, Chamoné has always liked to lead an active and adventurous lifestyle. She enjoys hiking, riding her motorbike, and exploring new places where she can experience different cuisines. Part of her interest in experiencing new cooking styles comes from her professional training background as she trained at the Culinary Academy between 2010-2011 and gained an Advanced Food & Wine Chefs Diploma.

On a personal level, you will find Chamoné has a sweet and friendly nature and a determination and enthusiastic approach to anything in life. A great example of this is in 2013 when Chamoné took on the challenge of climbing Mt. Kilimanjaro for the Mark of the Rhino charity.
Chamoné began her yachting career in 2013 on a yacht based in Palma, Mallorca, and has travelled throughout the Mediterranean. With her cheerful personality and her friendly approach, she is always available and willing to attend to our guests' requests to make your holiday relaxing and enjoyable.

SECOND STEWARDESS | Alexa Capozzi | Italian and German
Alexa was born in Italy yet grew up on the sunny Mediterranean island of Malta for most of her life. After studying events management in Scotland for 4 years, she decided to follow her passion for the sea & water sports, such as scuba diving and free-diving, and pursue a career in the adventurous industry of yachting. She has been with the Head of Housekeeping on a 64m vessel and is now in the proud position of 2nd stew onboard M/Y OCEANOS. With her creative, enthusiastic, bubbly personality, Alexa strives to provide an unforgettable time for those on board and make their stay as comforting as possible.

FOURTH STEWARDESS | Kelly Ann Butler | American
Kelly was born and raised in Long Island, New York but grew up just south of Atlanta, Georgia. With the big move from the North to the South she discovered her passion for traveling. She soon moved even further south to Savannah, GA for college where she enjoyed playing soccer and relaxing on the beach between her studies. Shortly after university, she made the big move to Chicago, IL where she started her traveling career as a flight attendant. After flying the friendly skies for a while, she heard the water calling. She soon left flying and started cruising the beautiful waterways of Southeast Alaska to the Chesapeake Bay and down the Mississippi River. After four fun years of cruising America, she decided to join yachting and go international. She enjoyed her time sailing the Caribbean and Central America and is super excited to see what the Med has in store this summer!

HOUSEKEEPER | Sara Suyon | Peruvian/Japanese
Proudly Peruvian-sansei (3rd generation of Japanese descendants) Sara was born in Lima, the only capital in South America with access to the sea. She grew up in a multicultural family that combines the Latin side with the Asian side, which taught her to love and respect traditions and culture from 2 totally different parts of the world. After school, she graduated in Advertising Graphic Design, a career that led her to do advertising projects throughout the country, being the key to deciding to study her 2nd career, Bachelor’s Degree in Tourism and Hotel Administration. Years later, she decided to venture out into the world, starting to work on cruises ranging from 848’ – 1094’ (about the height of the Empire State Building), fulfilling her dream of traveling the 5 continents. She traveled to Serbia to complete her Environmental Officer studies but due to destiny, she started working with this beautiful team in the yacht industry, bringing with her the experience and knowledge gained working in hotels, services, and restaurants. Sara strives to provide a positive attitude for guests and crew. She is a lover of music, photography, tourism, and languages and is happy to share her experience and knowledge with you.

DECKHAND/CARPENTER | Bailey Bacon | British
Throughout Bailey’s life, he has spent time playing golf semiprofessional for his club in Oxford, United Kingdom where he grew up. He comes from an outdoor, on-the-water environment due to living on the Thames River where driving tenders was an everyday occasion along with water sports. Bailey is an extremely motivated individual whatever the task ahead is and prides himself on the work he does to ensure the pleasure of your family and the condition of your vessel.

HEAD CHEF | Ricardo De Zwaan
Chef Ricardo De Zwaan brings a blend of Columbian, Dutch, and Thai cultures to the table. Originally from Columbia, Chef Ricardo has called Thailand home for the last 17 years. From a young age, Ricardo has been passionate about becoming a chef. Today, Ricardo has spent over 31 years in the culinary arts, creating edible masterpieces. He describes his cooking style as colorful, fresh, and innovative. Combining three different cultures into one delicious palette is what really gives Ricardo's food that 'wow' factor. In his free time, Ricardo enjoys riding his bike, fine dining, and indulging in life's many wonders with his family and friends. Chef Ricardo would like to welcome all guests aboard motor yacht OCEANOS. Sit back, relax, and let Ricardo and his team provide the rest.